Request for Prayers for Tom Gola 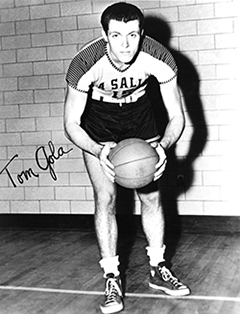 Gola’s name is synonymous with basketball at La Salle and throughout his hometown of Philadelphia. He was a four-time All-American and led the Explorers to the 1952 NIT and 1954 NCAA championships, winning the Most Outstanding Player award for each tournament. He was named the 1955 Player of the Year, and his NCAA record of 2,201 career rebounds stands to this day.

After graduating from La Salle, Gola played 11 seasons in the NBA for the Philadelphia Warriors, San Francisco Warriors, and New York Knicks. He won the 1956 NBA Championship as a rookie with the Warriors, making him one of only two players to win NIT, NCAA, and NBA titles. A five-time NBA all-star, Gola was inducted into the Naismith Memorial Basketball Hall of Fame in 1976.

Gola returned to La Salle in 1968 as the head basketball coach, a job he held for two seasons, compiling a 37-13 record. His 1968-69 team earned a 23-1 record and is considered by many to be the best team in Philadelphia Big 5 history.

La Salle’s basketball arena, where his retired No. 15 jersey hangs from the rafters, was named for Gola in 1998.

Tom Gola was a great man who truly lived the Lasallian spirit in serving the University and the community.

A funeral Mass will be held on Thursday, Jan. 30, at 11 a.m. at St. Albert the Great Church in Huntingdon Valley, Pa. Burial will be private.