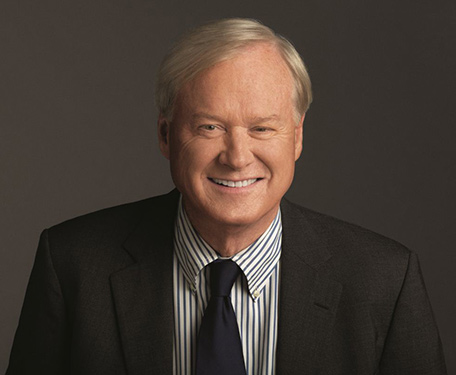 MSNBC talk show host Chris Matthews, one of the nation’s most prominent political commentators, will receive an honorary doctoral degree from La Salle University at its fall Honors Convocation ceremony on Sunday, Sept. 28.

The host of Hardball with Chris Matthews since 1997, Matthews graduated from La Salle College High School, which is run by the Christian Brothers, the religious order that founded and operates La Salle University. La Salle College—now a university—was founded in 1863 and added the high school to its campus in 1883. Matthews was a freshman at the high school in its final year at the 20th and Olney Avenue campus before it relocated in 1960 to Wyndmoor, Pa.

“Chris is the product of a Christian Brothers education, and that is evident when you look at his service in the Peace Corps during his younger days, but the educational legacy of the Brothers is also evident in the excellence he has demonstrated in broadcasting for many years,” said James Gallagher, Ph.D., Interim President of La Salle University. “For those qualities and his significant contributions to journalism, in which he often makes the confusing field of politics clearer to many, we are honoring him.”

A veteran journalist, Matthews has interviewed some of the world’s top leaders and covered some of the greatest historic events of the late 20th century, including the fall of the Berlin Wall, the first all-races election in South Africa, and the Good Friday Peace Talks in Northern Ireland.

Growing up in Philadelphia, Matthews was one of five brothers to graduate from La Salle College High School. From there, he went on to earn his undergraduate degree in economics from the College of the Holy Cross in 1967. He then spent two years working on trade and business development in Swaziland, Africa, with the U.S. Peace Corps.

When Matthews returned from Africa, he began a 15-year career in American politics, serving as a staff assistant in the U.S. Senate, presidential speechwriter in the White House, and top aide to legendary Speaker of the House Tip O’Neill, Jr.

In the late 1980s, Matthews made his transition to full-time journalism as the Washington Bureau Chief for the San Francisco Examiner.  He began his television career in 1994 as host of a two-hour nightly program on America’s Talking network before launching Hardball in 1997.

Matthews has received many awards for his work in journalism, particularly with Hardball, including the David Brinkley Award for Excellence in Broadcast Journalism, the Abraham Lincoln Award from the Union League of Philadelphia, and the Gold Medal Award from the Pennsylvania Society.  He has authored six best-selling books and he holds 30 honorary degrees from institutions of higher learning, including College of the Holy Cross, Fordham University, St. Joseph’s University, Temple University, The University of Scranton, and Villanova University.

La Salle University was established in 1863 through the legacy of St. John Baptist de La Salle and the Christian Brothers teaching order, which St. La Salle founded in 1680. La Salle is an educational community shaped by traditional Catholic and Lasallian values. Money Magazine has named La Salle University a “Value All-Star,” ranking it the eighth best college nationwide for adding the most value for a college education in its recent college rankings.