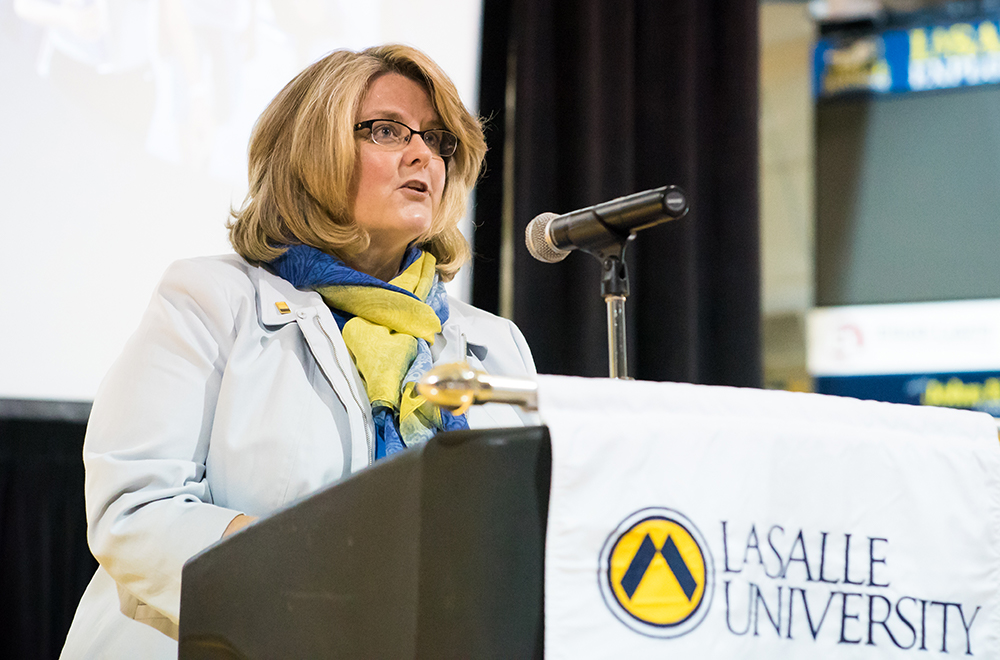 PHILADELPHIA (Sept. 27, 2016)—La Salle University today announced it will reset its tuition from $40,400 to $28,800—a 29% reduction—in a major step to improve the affordability of an undergraduate college education. Tuition for the 2017-18 academic year will return to what students paid in 2008, and the University will continue to offer generous scholarships and financial assistance to its students.

The initiative, known as An Affordable Path For All, builds on La Salle’s long-standing commitment to affordability. In addition to providing scholarships and financial assistance to 97 percent of students in 2015-16, the university was the only institution in the Philadelphia area to freeze tuition for the 2016-17 academic year.

“The cost of higher education continues to spiral year after year, with no end in sight,” said La Salle President Colleen Hanycz. “We cannot continue to assume that this issue will fix itself someday, somehow—the tuition model for higher education is broken. La Salle is working to reshape that model so college becomes an affordable reality for students and their families.”

Hanycz continued, “We are taking decisive steps to respond to what we hear from students and parents: They want a La Salle education but are concerned about how to pay for it. By reducing our tuition by 29 percent, we are providing real savings to students, and also ensuring that a transformational La Salle education will be accessible by students from more diverse socioeconomic backgrounds, supporting our Lasallian values of inclusion.”

Returning students will also see significant savings over what they expected to pay for future years since any subsequent tuition increases will be made from a lower tuition base. Reduced tuition should also increase retention rates, keeping capable students in school so they can complete their degrees and move on to successful careers.

“Many students and families see a ‘sticker price’ of $40,400 and assume they cannot afford to attend La Salle University,” said Tom Delahunt, Vice President for Enrollment Services. “The reality, however, is that few students pay the listed price. The overwhelming majority of our students receive state, federal and La Salle-sponsored grants and scholarships. An Affordable Path For All will help place La Salle University in the consideration set of more students who can benefit from the exceptional education that La Salle University delivers.”

La Salle University has consistently been recognized for providing a great value to its students, most recently by Money magazine (“5th on the 2016 list of 50 Colleges That Add the Most Value”), Forbes (“America’s Best Value College” list), and The Economist (“Top 100 Schools in the U.S. for Value”). The University has received additional value citations from the Brookings Institute and U.S. News and World Report.

An Affordable Path for All is the most recent initiative announced by La Salle to proactively position the university for strength and growth. In early September, the University adopted a series of strategic initiatives, including moving to a platform of institutional learning outcomes, the creation of five interdisciplinary centers of excellence, and the development of a program of endowed chairs and professorships intended to highlight and advance La Salle’s distinctive spires of academic excellence. On September 20, the university launched a new brand campaign, “Explorers Are Never Lost.” The campaign targets talented students seeking an education devoted to the formation of the whole person, one that encourages and supports students to blaze their own path as they prepare for successful careers and purposeful lives. Further, the university has invested considerably in campus infrastructure, completing a new school of business, constructing a highly interactive and student-centered quad and planning the development of a cutting edge Learning Commons.

“The entire La Salle community is coming together to rethink and reimagine how we do things in order to build on our strong foundation,” said Hanycz. “This includes assessing what we do well and what we can do better, and building a framework to highlight our points of distinction and spires of excellence. La Salle’s renaissance is well underway, and we will continue to boldly meet the calling of our mission.”

Additional information on An Affordable Path for All can be found at lasalle.edu/tuitionreset.

About La Salle University    La Salle University was established in 1863 through the legacy of St. John Baptist de La Salle and the Christian Brothers teaching order, which St. La Salle founded in 1680. La Salle is an educational community shaped by traditional Catholic and Lasallian values, and has consistently been recognized for providing exceptional value to students, most recently by Money magazine (“5th  on the 2016 list of 50 Colleges That Add the Most Value”), Forbes (“America’s Best Value College” list), and The Economist (“Top 100 Schools in the U.S. for Value”). Globally, the Lasallian educational network includes 1,000 schools (60 of which are institutions of higher education) serving 940,000 students in 80 countries.