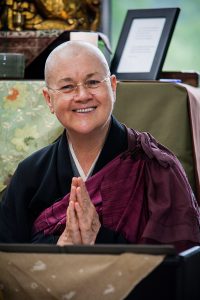 The lecture’s topics include the fundamentals of Engaged Buddhism, a form which uses Buddhist insights and practices as tools for addressing contemporary social problems. Roshi will also offer a workshop on meditation earlier that afternoon at 3:30 p.m., also in the De La Salle Chapel. Both events are free and open to the public. Parking is available in E Lot.

In addition to being Abbot of the Village Zendo in New York City, Roshi was also a Founding Teacher of the Zen Peacemaker Family, and author of Most Intimate: A Zen Approach to Life’s Challenges. She holds a PhD in Media Ecology and taught interactive media at NYU for twenty years, while undertaking traditional Zen training and becoming involved in activism/hospice care in response to the AIDS crisis. She is known for integrating traditional meditation and koan practice with social justice engagement.

Each year, the Religion Department hosts a nationally recognized speaker who offers a critical and reflective approach to the study of religion and theology in light of a contemporary cultural, ethical or moral question or phenomenon. Previous speakers in the series have included Cornel West, George Yancy, Joshua Dubler, Mark L. Taylor, Nancy Pineda Madrid, Michael Muhammad Knight, Elizabeth Johnson, and Kate Hennessey.