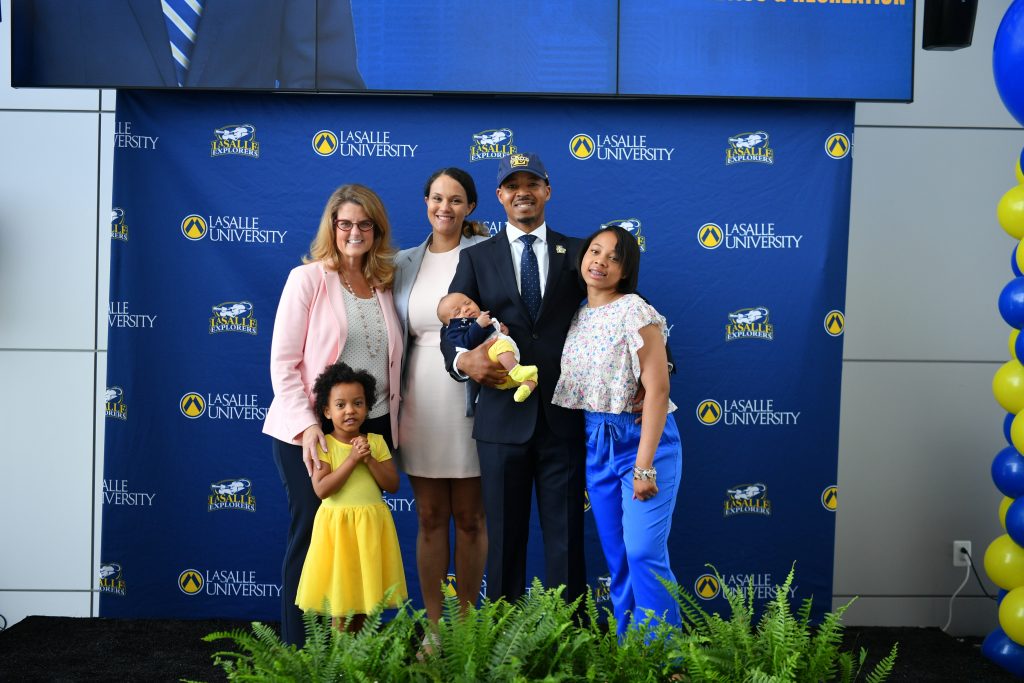 Brian Baptiste joined the La Salle Explorers as the University’s new Director of Intercollegiate Athletics and Recreation. The welcome event filled Founders’ Hall atrium on June 18 and was followed by a press conference immediately after.

Director of Athletic Development, Kale Beers, otherwise known as “The Voice of The Explorers” kicked off the event by ushering in a prayer from Brother Ed Sheehy followed by speeches from Student Athlete Saul Phiri, University President Colleen Hanycz, Ph.D., and Baptiste himself.

“An attorney by training, Brian comes to us after serving seven years at Northwestern, most recently as Deputy Director of Athletics for Capital Projects and Operations, where he played a significant role in one of the most transformational periods in Northwestern Athletics’ history,” said Dr. Hanycz.

During his tenure, Brian oversaw unprecedented athletic facility upgrades, including the $270 million construction of the Ryan Fieldhouse, Wilson Field, and Walter Athletics Center. The project, which impacted 19 programs and more than 500 student-athletes, provided varsity sport programs, along with club and intramural sports, a state-of-the-art development center designed to enhance the student-athlete experience. In addition, Baptiste led the planning and construction of the $110 million renovation of Welsh-Ryan Arena, the $23 million renovation of Trienens Performance Center, and the $15 million construction of Rocky and Berenice Miller Baseball Park. Furthermore, he has extensive experience in Division I Athletics having previously served in leadership roles at Georgetown University and the University of Delaware, and as a member of multiple NCAA and Big Ten committees.

Baptiste began his speech by thanking his mentors, family, and friends for providing him with the support needed to arrive where he is today. Baptiste added, “thank you, President Hanycz, for believing in me and for affording me the privilege of leading the La Salle Department of Athletics and Recreation.”

“I’m thrilled, honored, and humbled to join the La Salle community,” Baptiste said. “Our mission for La Salle Athletics is clear:  we are here to deliver a transformational student-athlete experience academically, socially, and athletically by ensuring that all Explorers have the resources and tools they need for sustained success in college and for the rest of their lives.”

Baptiste continued, “Through this commitment we will achieve excellence in all endeavors:  that we graduate our student-athletes; that we proudly compete and win at the highest level in Big-5, Atlantic-10, and NCAA competition; that we invest our time and energy into the Philadelphia community; and that we always, always act with the utmost integrity.”

The future for La Salle Athletics looks bright. According to Baptiste, “when you think about the fresh energy and the new coaches, the things that Bill [Bradshaw] has been able to do since he came back to his alma mater, and when you think about the vision that President Hanycz has and the University has, for Athletics and the University… All of those things are exciting to me, to be part of a team, and partner with a tremendous leader to be able to take the Athletics and Recreation Department to the next level.”

Watch the full event below: