Mary Eyde will move from Northwest Philadelphia to West Africa, where she will volunteer for 27 months as an English teacher in Benin. 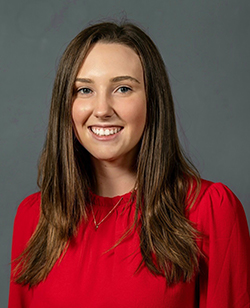 Mary Eyde will earn her undergraduate degree in political science this coming May. A La Salle University senior, she spent considerable time this fall semester thinking about her future.

Attend law school? Pursue an advanced degree? Enter the workforce? All of these options were on the table for Eyde, a native of Collegeville, Pa.

“Ultimately,” she said, “I kept coming back to this idea I’ve had in my head since the fifth grade.”

Eyde acted on her lifelong ambition. She applied for and earned acceptance into the Peace Corps, which traditionally takes only one-third of all annual applicants. She will leave the U.S. and head to West Africa, where she will serve as a volunteer English teacher in Benin. Her 27-month appointment begins in June, less than one month after participating in the University’s undergraduate commencement exercises.

“It’s a proud moment when you learn you’ve been accepted,” said Eyde, 22, a student-athlete on La Salle’s golf team. “People may say, ‘I want to travel and leave the area after graduation.’ The real reason you pursue the Peace Corps is to inspire and empower others, better global communities, and teach life skills. On top of that, I really enjoy working with young children and teaching is second nature to me. I spent most of my teenage years working with children who were learning the sport.”

In Benin, Eyde will lead anywhere from 40 to 70 students across all age ranges in classes focused on teaching the English language to native French speakers. French is the national language in Benin, where close to 40 percent of the population speaks it. Much of the Beninese are multilingual, with French serving as a secondary language for those who aren’t proficient in it.

This past semester, even before she learned she had been accepted by the Peace Corps, Eyde enrolled in an entry-level French course at La Salle. Perhaps it was an act of prescience, she said.

“I’ll need to be conversational in the language by the time I arrive,” said Eyde, who will complete roughly 10 hours per week in French language coursework over the next five months.

She also will engage in three-months of pre-service training that supports integration into the community, intercultural learning, and successful sustainable work.

Upon arrival in Benin, Eyde will live with a host family. A bicycle will serve as her primary means of conveyance. Already self-sufficient, Eyde will learn to cook with different spices and ingredients than those to which she’s accustomed and clean her clothes without amenities like a washer or dryer. She wants to document her experience through posts on Instagram.

Eyde hopes to create additional opportunities for those in her new community, like a weekend soccer league for children, a community garden to teach agricultural skills, or crafting exercises to encourage creativity.

She views her time in the Peace Corps as an opportunity to inspire other La Salle students—not like they need the inspiration, she said.

“Our students at La Salle are service-oriented. That’s why we come to this University,” she said. “People have been supportive and understanding. They get it. They understand it. Outside of our University community, people ask, ‘Why are you doing this?’ La Salle is uplifting and supportive. It’s good we have people going all around the world to spread the Lasallian mission, morals, and values.”

Eyde’s professors in the School of Arts and Sciences’ Department of Political Science are similarly supportive of her upcoming Peace Corps appointment.

“Mary will be taking all that she has learned here to Benin, where she can make a real impact on the world,” said associate professor and chair of political science Dr. Michael Boyle. “Her appointment reflects not only the global perspective that we hope La Salle students gain with their time here, but also the commitment to serving others that distinguishes the Lasallian tradition from others.”

“This is a highly competitive opportunity that recognizes Mary’s talents, hard work, and commitment to service,” said Dr. Miguel Glatzer, associate professor of political science. “We all look forward to hearing reports from Benin and we have full confidence that Mary’s achievement will inspire others in the department and throughout our University.”