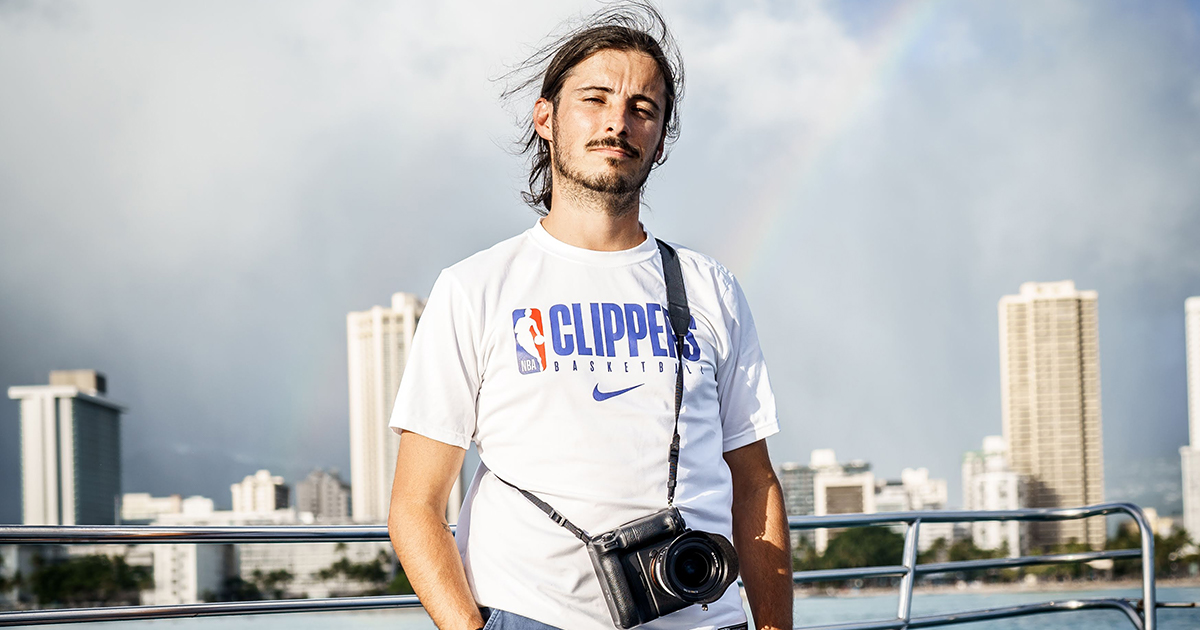 Whether seated on the court or behind a computer, Kurt Gies, ’12, has generated a number of memorable moments for basketball fans.

Gies is in his fifth season working in the National Basketball Association (NBA), and his first as manager of social and content for the L.A. Clippers. He’s tasked with capturing photography, developing campaigns, and overseeing content and creative direction for the Clippers’ social media platforms. He spent the four prior seasons in a similar role with the Philadelphia 76ers.

A native of Holland, Pa., Gies fortuitously joined the Clippers at a pretty auspicious time in their history.

“Last summer, actually a month after I started, the team signed Kawhi (Leonard, the MVP of last year’s NBA Finals) and traded for (perennial all-star Paul George),” said Gies, who graduated from La Salle with a marketing degree and a minor in psychology. “As you might imagine, Los Angeles is home to a lot of Lakers fans, but that tide is turning. We see people becoming fans every day. We see fans proud to wear the Clippers’ colors. Our arena is packed every night. It’s really fun to watch.”

Each night, Gies chronicles one of the NBA’s most entertaining teams. On game days, he walks through the arena with two cameras, a smart phone, and multiple lenses looking for ways to visually tell that night’s story. Fashion and professional sport have become interwoven; that’s why he and a colleague arrive early enough to see players enter the arena in their off-court attire. Then Gies moves to his spot on the court’s baseline, where he may snap 2,000 photographs. From that pool, he identifies and edits about 150 for use across a host of media.

“You never get the same shots in a game, and that’s my favorite part of the job,” Gies said.

At La Salle, Gies had not envisioned a career in social media management. He “gravitated” to the Explorers’ men’s basketball team, he said, and attended more games than he can remember. Back then, social media usage wasn’t nearly as pervasive as it is today.

Gies’ role, and the function of social media managers globally, has taken on significantly more import in only the last several years. According to the U.S. Bureau of Labor Statistics, increases in the number of social media management positions over the next decade will outpace overall job growth.

Approximately 3.4 billion people globally use at least one social media platform. Segmented exclusively for NBA fans, social media usage continues to skyrocket. In 2012, the year in which Gies graduated, NBA Facebook and Twitter accounts had roughly 20.5 million followers. Today, that number is closer to 66.5 million—accounting for 324-percent growth in just seven years.

“It’s a bigger audience today,” Gies said. “You’re looking for those quality moments that will drive engagement and take people behind the scenes.”

His work experience at an advertising agency, following graduation, thrust social media management into his portfolio. He worked directly for a client with 30 commercial locations, all of which had independent social accounts. That experience, Gies said, taught him important lessons on developing a brand, carving out a voice for the client, and building an audience.

“It’s not just being active on the accounts, but finding ways to separate yourself from a crowded pack,” he said.

There, and with the 76ers, Gies learned just how valuable a couple keystrokes can be toward elevating a brand. He identified May 17, 2016, as a crowning moment in his professional career. The Sixers won the NBA Draft lottery, meaning they had secured the top pick in the forthcoming draft. Another team, with which the Sixers had the ability to swap first-round picks, sheepishly asked the Sixers on Twitter if they would consider.

Gies crafted a tweet that generated thousands of retweets and likes within minutes.

“It was one tweet,” Gies said, “but it defined me for a bit. It was surprising how well it performed.”

Gies has a date circled on his calendar—Feb. 11. That’s when the Clippers visit the Sixers in the teams’ only Philadelphia meeting of the season. It’s also when Gies returns to his hometown. His passion for the city and La Salle remains intact.

“I greatly enjoyed my time at La Salle,” he said. “I met lots of lifelong friends and it helped shape me and my career.”

Prior to this season, Gies and his colleagues asked players to pose for what had the look and feel of first-day-of-school photographs, accompanied by handwritten cards complete with their hometowns, what they love about Los Angeles, and their motto for the season. Gies, on his personal Instagram account, posted a similar photograph.