‘A conversation about race,’ from the student perspective

A newly published book compiles the contemporary essays of La Salle students on race relations in the U.S. 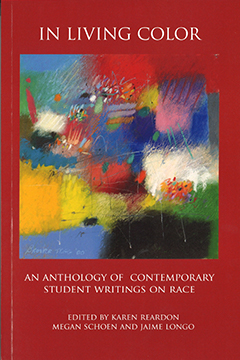 What began as a classroom exercise graduated to a book project.

Karen Reardon, Ph.D., J.D., challenges La Salle University students in her business law courses with a written assignment asking students to connect their study of law and ethics to current events and their lived experience. When given the opportunity, the students, she found, routinely gravitated toward issues related to discrimination and race relations.

Reardon, an associate professor of management and leadership at La Salle’s School of Business, had an epiphany.

“I thought, ‘This writing is powerful and important, and yet it’s for an audience of one—me,’” she said.

That’s not the case any longer. Reardon, together with colleagues Jaime Longo and Megan Schoen, compiled and edited a book of academic writings by La Salle students on the often divisive and contentious issues stemming from race in the United States. The book, “In Living Color: An Anthology of Contemporary Student Writings on Race,” was published in January with the assistance of Parnilis Media.

The book features more than 60 unique voices, primarily those of La Salle students, in the form of academic writings in various genres they had submitted to professors or as part of a university-wide call for participation between 2014-2017. Some are poetry and prose, while others are essays, illustrations, and research papers. They are paired with invited essays from La Salle professors in the Management, Foreign Languages, Social Work, Public Health and Sociology departments, and three Lasallian Christian Brothers.

The student writings appear in one of the book’s seven units, which range from acknowledging and accepting the problem to identifying ways in which Americans can find hope and seek respectful dialogue.

Reardon identifies as “a personal witness to discrimination based upon racial identity.”

She’s the mother of two African-American young men, ages 23 and 21, adopted through the foster system. Upon moving to the tri-state region in 2007, she and her family “single-handedly integrated our community,” she said. Shortly after, her oldest experienced verbal and physical abuse from one of his then-middle school classmates. Administrators met with Reardon and her family to discuss the situation, and simultaneously issued a no-tolerance policy for acts of hate.

“Those are the kinds of things that happen to people day to day,” she said. “I’m living witness to how persons of color experience micro-aggressions—and bigger aggressions—virtually every day and how it affects their self-worth and dignity.”

“In Living Color” is available through Amazon and Barnes and Noble. Reardon said its contents speak to multiple audiences.

“This is for anybody who wants to have a conversation about race,” she said. “It’s a way for people to develop empathy. That’s missing in our conversations about race today. There’s not a lot of listening to the emotions, words, and feelings, or attempting to understand where people are coming from. That’s where we, as a society, will find progress and achieve social justice.”