A passion for environmental, autism education

Zaire Whaley, ’20, aims to “make the world a better place”

Zaire Whaley, ’20, wants to change the world through education. She began teaching at an early age, driven by a desire to inform those around her about autism and its effect on her life.

“I’ve always viewed myself as a self-advocate and an advocate for others with autism,” said Whaley, 22. “I want people to know the signs and stigmas to avoid uncomfortable situations not only for those on the spectrum, like me, but also for those who aren’t.”

That educational effort continues even today for Whaley, a native Philadelphian and a member of La Salle University’s graduating class. After earning a bachelor’s degree in Integrated Science, Business and Technology (ISBT), Whaley will focus on creating educational tools and programs around pollution awareness and clean and renewable energy. That passion has inspired Whaley to continue her education at the graduate level next fall.

At age 8, Whaley received a diagnosis of high-functioning autism. This form of autism affects an individual’s ability to communicate and socialize, as well as recognize emotion in others—particularly with people her age. Often, during her childhood and in teenage years, Whaley befriended teachers at school rather than her peers.

“When I was looking at colleges, I had the academic side covered,” said Whaley, the salutatorian of her high-school graduating class. “I needed a program that understood me and would help me on the social side. For me, it was LADDER.”

LADDER refers to the La Salle Autism and Developmental Disabilities Education Resources Center. Funded by the Widener Family Foundation, La Salle’s LADDER Center provides after-school programming for elementary-school children in the community with autism, in addition to on-campus programs and resources for La Salle students who are on the spectrum.

The LADDER Center builds and strengthens social and soft skills in La Salle undergraduates with autism. Through the center, Whaley began socializing with others in her age bracket. The Peer Alliance at La Salle (PAL) program helped her develop a base of friends, beginning in her first days on campus.

Whaley’s work with Jason Diaz, Ph.D., assistant professor of ISBT, has led to the creation of a working group at La Salle to improve resources and services for students on the spectrum, said Jaime Longo, Ph.D., executive director of the De La Salle Institute. 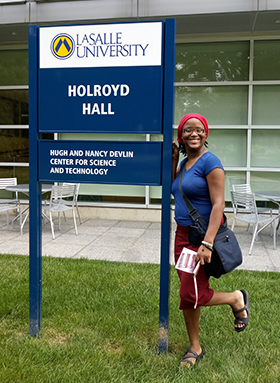 “Zaire is a remarkable young woman who has challenged me to grow as an educator and a mentor,” Diaz said. “She is one of the most tenacious people I know, and I cannot wait to see her carry her successes beyond La Salle’s campus.”

“Watching Z blossom into a vibrant, indispensable member of the La Salle community, particularly over this last year, has been a wonderful experience,” Longo said.

Whaley’s development in and out of the classroom is what she hopes will educate others about the autism spectrum. Whaley, who serves as a La Salle Ambassador, has made the dean’s list at La Salle’s School of Arts and Sciences on four occasions. She has delivered educational presentations about autism at both La Salle and Temple University. She also volunteers as a counselor at Dragonfly Forest, a summer camp in Dingman’s Ferry, Pa., for autistic children.

“Working with these children reminded me of myself at that age,” Whaley said. “I know I can make a difference and I hope others view me as a role model.”

“Z has positively influenced so many on campus,” said Jim Scanlon, associate director of the LADDER Center. “I have seen tremendous growth in just that time. I am not only been impressed with her academic skills, dedication to her schoolwork but I have also seen her incredible social growth with her circle of friends.”

In the fall, Whaley will begin a graduate-degree program in geoenvironmental studies at Shippensburg University. She hopes to eventually develop educational programming geared around the perils of pollution and efficient and clean energy sources.

“I want to make the world a better place,” Whaley said.

“I feel blessed to have been a part of Z’s personal journey here,” said Kathleen B. Finnegan, management and leadership instructor in La Salle’s School of Business, “and also to have watched her challenge herself as she so happily explored and experienced her endless possibilities on campus and beyond.