A call for social justice called him to La Salle

New graduate Brandon Robbins-Cartagena, ’20, will support children from the most-vulnerable communities in his professional career. 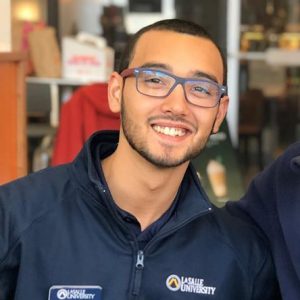 Brandon Robbins-Cartagena, ’20, first toured La Salle University during a trip to Philadelphia at the age of 12. He tagged along with his mother, alumna Natalie Robbins, ’95, on a trip to campus for lunch with one of her favorite former professors—Br. Edward Sheehy, FSC, Ph.D., an associate professor of history.

From that point forward, Robbins-Cartagena said, he felt at home.

“I enjoyed the campus. Br. Ed brought me my first La Salle shirt, and I said to myself, ‘This is where I’m going to college,’” he said. “La Salle and its mission are embedded in my family.”

A graduating student in La Salle’s Class of 2020, Robbins-Cartagena earned a degree in social work with a concentration in education.

A native of Danbury, Conn., Robbins-Cartagena has “personal connections” to two mass shooting incidents—including the 2012 shooting Sandy Hook Elementary School in Newtown, Conn. He said his cousin’s best friend was lost in the Parkland, Fla., shooting in 2018 at Marjory Stoneman Douglas High School.

“Racial, economic, and educational justice are my callings, and I identify strongly with the intersectionality of economic and racial justice,” Robbins-Cartagena said. “Stemming the gun violence epidemic, most specifically, is a big interest of mine.”

Robbins-Cartagena, who turns 22 in June, credited his work in racial and economic justice with Laura Roy, Ph.D., associate professor and chair of La Salle’s Department of Education, for helping inspire his major in social work. At La Salle, Robbins-Cartagena “almost immediately” got involved with peers and in activities and organizations aimed at stemming gun violence. He worked with three local chapters of Moms Demand Action and University officials in 2018 to organize La Salle’s Walk Out for Gun Safety, in alignment with a national movement, to promote social justice across campus.

“Brandon is a true leader,” said Rosemary Barbera, Ph.D., associate professor and chair of the Department of Social Work. “He asks inquisitive questions, thinks deeply, and profoundly cares for others. … He has not shied away from confronting racism and bigotry when he has been witness to it or a victim of it. In true Lasallian spirit, Brandon is committed to the common good and to working to make sure that in our land of plenty people do not suffer.”

As a third-year student, Robbins-Cartagena represented La Salle at the Ignatian Solidarity Network’s Family Teach-In for Justice in Washington, D.C.—the largest Catholic social justice conference in the nation. He worked and travelled with Br. Ernest J. Miller, FSC, D.Min., La Salle’s Vice President for Mission, and Maureen O’Connell, Ph.D., associate professor and chair of the Department of Religion and Theology, and a group of fellow students to return to campus with more information on social justice. He returned in 2019 as the leader of La Salle’s delegation, intent on learning more about and using the Jesuit perspective and conference template “to help build a Lasallian conference in its likeness.”

Robbins-Cartagena’s post-graduate plans center on the acceptance of what he calls “my dream job.” He will work in New York City as a juvenile justice intervention worker at The Children’s Village, a non-profit residential treatment facility for children in society’s most vulnerable pockets. In partnership with families, The Children’s Village works with children who suffer from development disabilities, neglect and/or abuse, and a lack of access to education, to provide therapy and case management.

“The ultimate goal,” Robbins-Cartagena said, “is the reunification of families and the return home for children who have been tried, convicted, detained, or placed in detention. I will be working with an amazing clinical team and I am excited for this next chapter.”

“Brandon brings the richness of the Lasallian heritage of education and pastoral care with him. Indeed, this heritage fully coheres with The Children’s Village mission,” said Br. Ernest. “I can think of few others who are better suited to transition from a robust undergraduate education at a Lasallian Catholic institution to working to enact the mission of The Children’s Village. He is the embodiment of the type of honest, well-rounded, intelligent, and talented individual who will make his family, and us all, proud.”