History made on La Salle’s Day of Giving 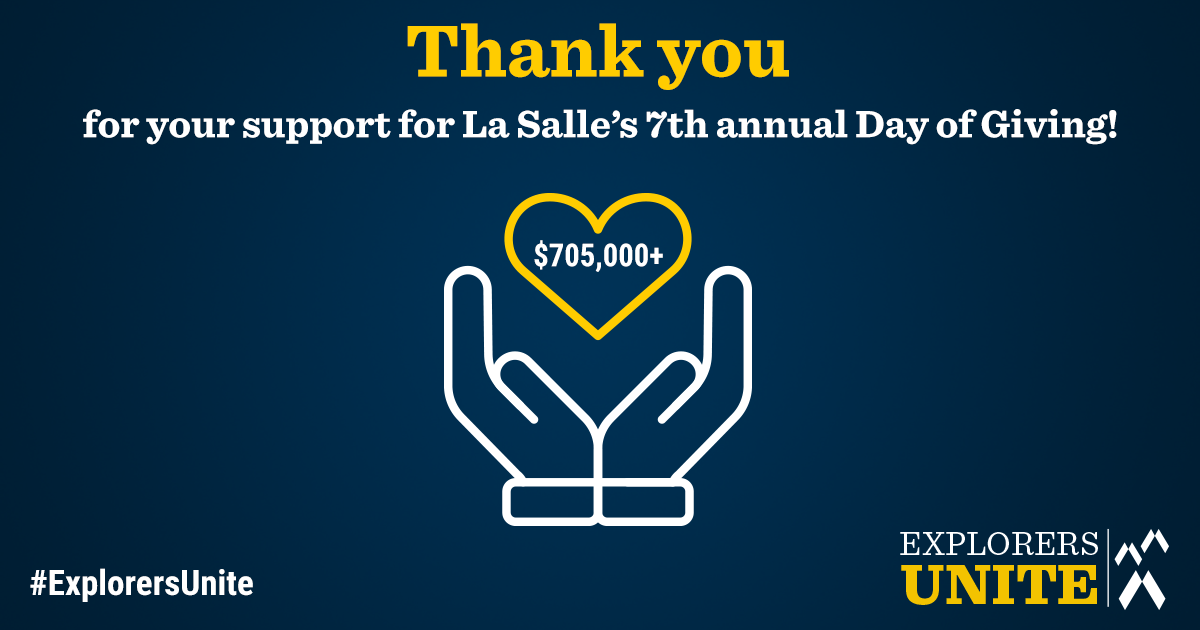 Contributions to the general scholarship fund, among other areas, totaled more than $700,000, establishing a Day of Giving record total.

The La Salle University community united in a big way on May 27 to support student scholarships for the University’s annual Day of Giving.

In all, nearly 1,500 gifts accounted for more than $700,000 of philanthropic contributions to the University. This established a record mark for La Salle’s Day of Giving, which is in its seventh year. Supporting the University’s general scholarship fund was the focus of this year’s Day of Giving, said Cathleen Parsons-Nikolic, La Salle’s Vice President for Advancement. She noted the generosity of alumni, faculty, staff, students, and University friends, which will help ensure access to a Lasallian education for the Explorers of today and tomorrow—and particularly during a time of pressing need.

“The need to support our students at this moment in history is critical, and I am overwhelmed by the generosity of the La Salle community,” said Parsons-Nikolic. “Our community’s commitment to our students is unwavering. Their pride in La Salle and passion for helping our students achieve success and attain a transformational degree is truly humbling.”

The Student Scholarship Fund received gifts totaling more than $275,000—including one from University Trustee Robert W, Liptak II, ’86, who provided a dollar-for-dollar match of the first $100,000 contributed to the fund. Support for the University’s students and their families remains crucially important, “and now more than ever,” Parsons-Nikolic added.

More gifts originated from the Class of 2020 than from any other La Salle graduating class. These recently graduated students made 93 contributions on Day of Giving. Next, among alumni, the Class of 1970 made 40 gifts, followed by the Classes of 2012 and 2018, which each contributed 33 gifts.