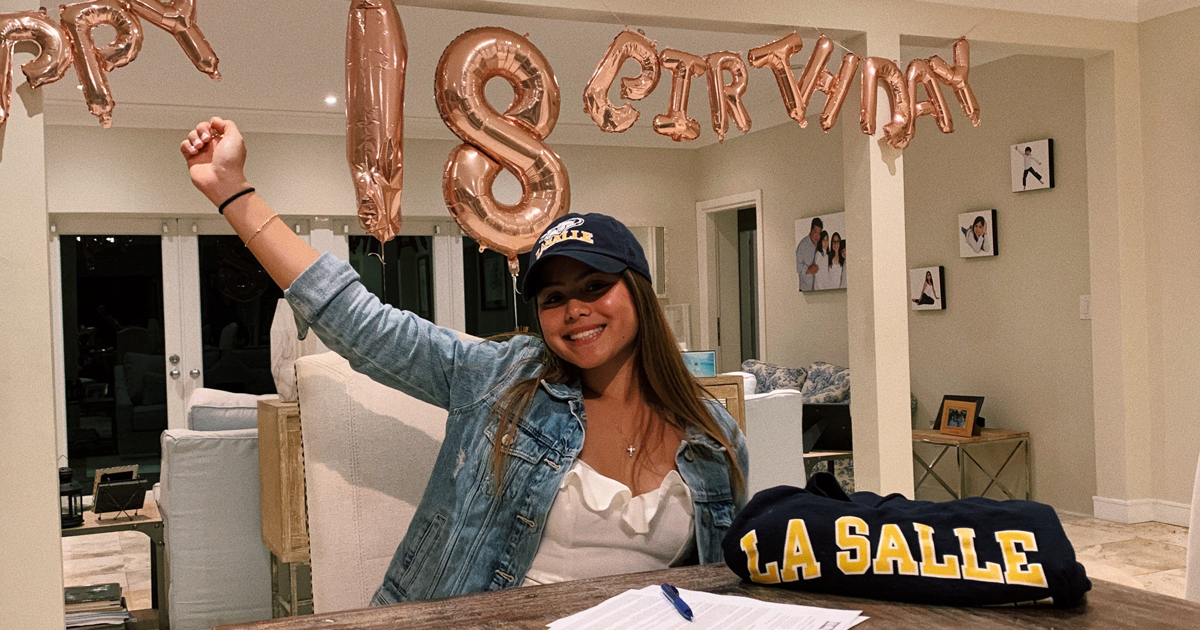 Meet Isabella Leaño, driven to change lives through fundraisers and a career in medicine.

The memory of her paternal grandfather, Napoleon, figures largely in Isabella Leaño’s life.

An incoming first-year student in La Salle University’s Pre-Health Professional program, Leaño will major in chemistry and biochemistry as a member of the University Honors Program. She aspires to follow in her grandfather’s footsteps and pursue a career as an anesthesiologist.

“As a little girl, he introduced me to the whole field of anesthesiology,” said Leaño, a native of Miami. “He put it in simple terms for me. He described it as like he was putting people to sleep and then raising them from the dead. From that moment on, I was always amazed by his medical discipline. As I got older and did my own research, I realized I wanted to pursue a career within this incredible specialty.”

Her grandfather’s legacy extends to Leaño’s philanthropic efforts on the tennis court, where she has competed nationally with the United States Tennis Association (USTA) since she was 10 years old.

Along with her doubles partner from Carrollton School of the Sacred Heart in Miami—which Leaño attended from grades 6 through 12—Leaño mounted the Smash Cancer Tennis-a-thon last year in honor of her grandfather, who died in 2013 from acute myeloid leukemia. Leaño remained on the court for the entire 12-hour event, participated in match play, clinics, and drills, and helped raise more than $4,000 for Stand Up To Cancer. Combining her passions for tennis and medicine made 12 hours of tennis in the South Florida heat more bearable.

“I was playing and raising money for something so close to my heart—my grandfather and cancer research,” said Leaño, who is exploring ways to hold a virtual version of the event in the fall. “The sun beats you down, but it was easy to devote all my time and effort to do something like that.”

The opportunity to play tennis collegiately was a factor in Leaño’s decision to attend La Salle. She brings a wealth of competitive experience to the La Salle women’s tennis team, including playing against trailblazing tennis siblings Serena and Venus Williams in the pro-am charity tournament First Serve Miami, through which Leaño helped fundraise to provide underprivileged children with tennis lessons and equipment.

“Playing with the Williams sisters was a one-of-a-kind experience,” said Leaño. “The mission behind both the organization and its events is so inspiring. I’ve donated tennis equipment and clothes, and I’ve also volunteered at the camp during the summer.”

La Salle tennis coach Marco Matteucci said Leaño will be a valuable member of the University community, citing her dedication to academics, athletics, and community service.

“Isa is one of a kind,” said Matteucci. “What she has been able to do with her (Smash Cancer) foundation, we don’t see that a lot in our world today. It exemplifies the character that she has. From an athletic standpoint, she is going to contribute to making our team better. From an academic standpoint, I can’t see her not being at the top of her class. And I think that she will be one of our leaders in community involvement.”

“I want to emerge prepared for medical school and the real world,” said Leaño. “I want to be ready to help people. That’s my passion”