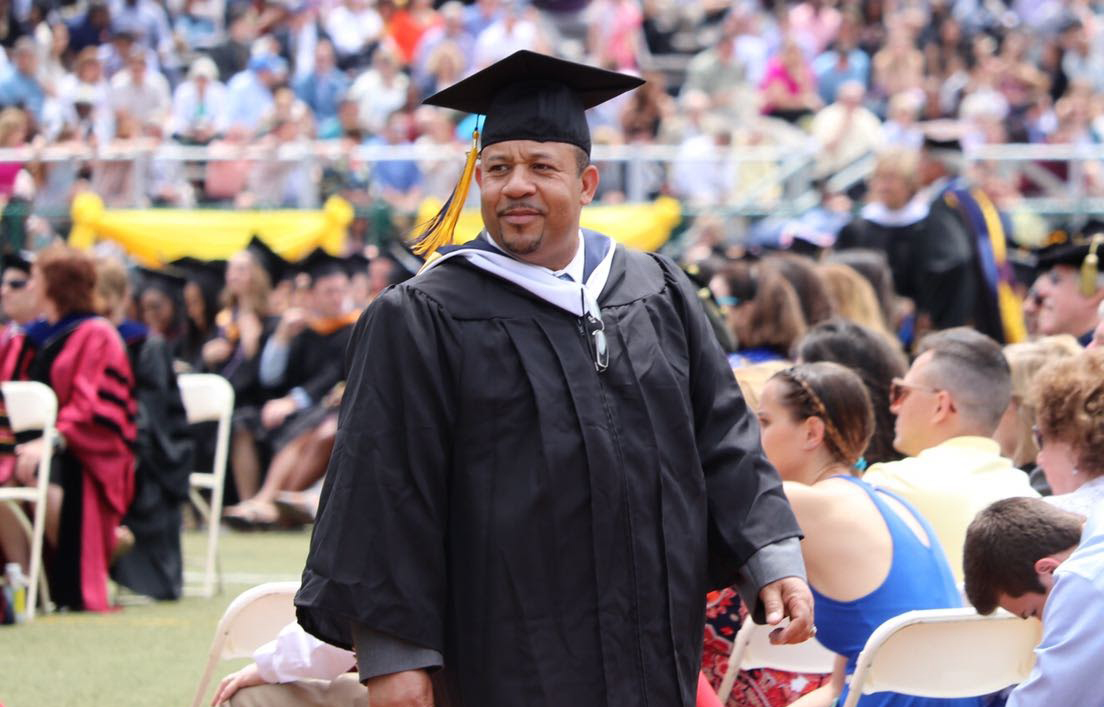 Jesus Zorrilla, ’17, and his family have made the most of the BUSCA program.

A commercial on the radio changed Jesus Zorrilla’s life.

Had Zorrilla, ’17, missed an advertisement in 2012, promoting a program at La Salle University, the Dominican Republic native who emigrated to the United States in 1994 might still be working two jobs, six days a week. It’s possible he never would have mastered the English language, either.

Instead, Zorrilla took advantage of the unique opportunity to transform his life and his future at the age of 47 by enrolling in La Salle’s BUSCA program. BUSCA stands for Bilingual Undergraduate Studies for Collegiate Advancement, a program that offers Hispanic students the chance to earn a four-semester Associate of Arts degree from La Salle with a concentration in English for Academic Purposes.

The program transformed Zorrilla’s life and ended his need to work 14-hour days.

“The BUSCA program gave me the opportunity to change my life,” said Zorrilla, who studied for free by qualifying for a package of federal and state financial aid that is available to students enrolled in the program (University grants and private scholarships are also available to BUSCA students).  “I no longer have to work until 1 a.m. on the street making pizza deliveries. If I didn’t hear the radio ad and then make that call to BUSCA, I would probably still be working for a pizza place.”

Zorrilla transferred the 60 credits he earned in BUSCA toward a bachelor’s degree in psychology, which he received from La Salle in 2017. He is currently working toward his master’s degree in bilingual and bicultural studies at the Hispanic Institute at La Salle, while holding a full-time job as a social worker for a home health care agency.

It’s been a remarkable academic journey for Zorrilla, especially considering the uphill climb he initially faced due to a language barrier.

“I was afraid to speak English at the beginning, but I got through it,” said Zorrilla, who resides in North Philadelphia. “I knew that my dreams were very big, and those dreams were stronger than my fears. That made me stronger. It showed me I can do it. Every semester, I was doing better and learning more. I developed confidence in myself, and everyone helped me. Professors would tell me, ‘Let me know what you need. I will help you.’”

The deadline for BUSCA applicants who would like to begin the program in the Fall 2020 semester is July 31.

Click here to request more information about the BUSCA program.

Since the program’s launch in 1993, BUSCA has produced numerous success stories like Zorrilla. According to BUSCA director Joanne Woods, nearly 70 percent of BUSCA graduates start pursuing their bachelor’s degree within one year of completing the program, with many remaining at La Salle. And like Zorrilla, most students balance the evening class schedule with a full-time job and family obligations.

“Jesus is a great example of the ‘Sí, se puede’ (Yes, you can) spirit of BUSCA students,” said Woods. “He worked hard in his studies and uplifted his classmates by offering to help anyone who needed it. It was amazing to see his progress throughout his studies in BUSCA and then in (pursuit of) his bachelor’s degree at La Salle, especially knowing that he was trying to master a second language later in life while working full time and raising a family.”

His daughters Jamer and Jamery both enrolled in the BUSCA program after watching their father thrive at La Salle. Jamer, who earned an accounting degree in the Dominican Republic before arriving in the United States, graduated BUSCA in 2018 and now works for a mortgage company. Her sister Jamery completed the program in 2019 and plans to pursue a bachelor’s degree at La Salle in criminal justice in the near future.

“Before the BUSCA program, I was stuck in a job where I did not advance professionally or economically because I did not dare to look for a job that required a higher level of English,” said Jamer. “I am currently working in a company surrounded by only English speakers with a good salary and good benefits.”

Once Jesus Zorrilla earns his master’s degree from La Salle, he plans to pursue a more-specialized area of social work through which he hopes to utilize his bilingual skill set as a drug and alcohol recovery therapist. It could potentially be another milestone on a career path Zorrilla may not have been able to embark upon without the help of BUSCA.

“I feel very grateful to BUSCA,” said Zorrilla. “I almost don’t have words to describe how I feel. They gave a great opportunity not only to me and my family, but also the Latino community in Philadelphia.”