Perspectives on immigration, from the U.S.-Mexico border

An incoming first-year student wants to pursue a career in law and make a difference for U.S. immigrants. 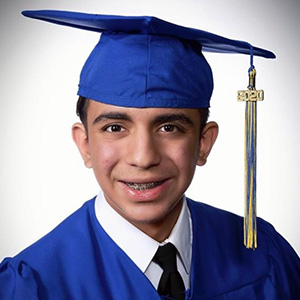 Growing up along the United States-Mexico border has given Enrique Carrasco, an incoming first-year student at La Salle University, a unique vantage point to immigration issues that many learn about only through the media.

Carrasco, who emigrated to Texas from Mexico with his family as a child, shared his perspective on immigration with others while attending Cathedral High School, a Lasallian Catholic school in El Paso. For three years, Carrasco served as president of a program called El Otro Lado (Spanish for “the other side”), through which he helped educate visiting students from other Lasallian high schools and colleges across the United States about life on the border with immersion trips.

“We’d talk to them about the immigration laws on the U.S. side, and show them the conditions of life on the Mexico side,” said Carrasco, who will major in political science at La Salle. “We would go up to the border wall, right across from the Mexican city of Juarez, and show them the houses made from cardboard and the people living there in this really bad neighborhood. … That gave (the visiting students) perspective on why people come to the U.S. illegally.”

While Carrasco worked throughout high school to help broaden the minds of other Lasallian students regarding immigration, he said his Lasallian education at Cathedral was important in allowing him to gain perspective on his personal heritage.

“Cathedral really brought out the Hispanic side in me,” said Carrasco. “Before that, I really didn’t interact with a lot of Latinos. I lived in a little town outside of El Paso called Horizon City. It’s near an Army base called Fort Bliss, so there was a lot of military people, and not many Latinos. Then I went to Cathedral, where 50 percent of the student body is Latino, and the teachers and staff were so supportive. It made me realize what there was in the world, and my place in the world. Looking back, it was the perfect fit.”

Carrasco’s high school years also featured a busy athletic schedule that routinely found him competing on both sides of the border.

He played varsity baseball all four years at Cathedral. To pursue water polo, which Carrasco will continue to play at La Salle, he made a daily commute into Mexico, since there were no water polo programs in the El Paso area against which to compete. All that effort paid off when Carrasco’s water polo team took home a gold medal in the Mexican National Olympics in 2019.

“It was a grind, but I’d do it all over again,” said Carrasco. “The moment baseball practice ended, I would have to cross the border and drive across Juarez about 40 minutes to practice water polo. After that, it was about an hour-and-a-half drive back home.”

As he prepares to enter La Salle, Carrasco views his political science major as the first step in following his childhood dream of becoming a lawyer. And his dedication to immigration issues could very well inform his eventual career path.

“I know I want to go to law school,” said Carrasco. “I’m still debating whether I’d like to be a criminal lawyer or practice immigration law. Immigration law and policy is such a big deal to me. I have a unique perspective there. And I know I have perspective to gain from my classmates and teammates at La Salle.”