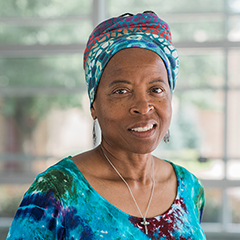 Since her childhood, Rhonda Hazell, DPM, has lived to serve. She demonstrated her commitment to others by supporting and leading local food and clothing drives in her youth. Later in life, while pursuing a graduate degree, she made a habit of involving the children she babysat in volunteer activities, too, encouraging them to consider donating forgotten or underused toys to less-fortunate children.

“They’d see these children who were in transition between homes and didn’t have access to the toys they had,” Hazell said, “And after making the donations, they’d tell me it made them feel so good. That’s validation that we are here on this earth to serve others, and it’s a theme I’ve carried with me all my life and into the classroom.”

An assistant professor of biology and the department’s anatomy and physiology coordinator, Hazell is the 2020 recipient of La Salle University’s Lindback Distinguished Teaching Award. Historically, Hazell is the 100th recipient of the award, which recognizes excellence in teaching, inspiration in and out of the classroom, and devotion to helping students realize their potential.

La Salle has conveyed the Lindback Award to members of its full-time faculty for nearly 50 years, following a generous award in 1961 from the Christian R. and Mary F. Lindback Foundation. To determine each year’s recipient, a selection committee composed of University academic leaders fields nominees across all disciplines.

“Those who nominated Dr. Hazell pointed to her willingness to selflessly give of her time to encourage all her students, both in and out of the classroom, and support students who are struggling,” said Steven F. Siconolfi, Ph.D., interim provost and vice president of academic affairs. “Others identified her as one of the best professors they have ever had. For many reasons, including these, La Salle is proud to recognize Dr. Hazell with the Lindback Distinguished Teaching Award.”

A Lasallian educator for 19 years, Hazell contributes to the University classroom outside of her classroom commitments. She has led multiple mission trips to Haiti, where she and students deliver supplies and funds they have collected to a local Lasallian school, a medical clinic, and a church. She also organizes and participates monthly service trips to Philadelphia-area soup kitchens.

“My mother and father instilled in me the importance of sharing my resources with others less fortunate,” Hazell said. “Touching someone’s life is my daily prayer. I love teaching and it’s a blessing for me to share my knowledge with others and inspire students.”