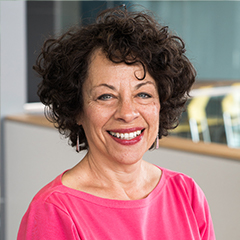 The pursuit of an MBA brought Susan Mudrick, ’84, to La Salle University nearly 40 years ago.

“And then I never left,” she said with a laugh.

The longtime assistant dean of La Salle’s School of Business, Mudrick received the 2020 Distinguished Lasallian Educator Award. Nominated and chosen by a panel of La Salle faculty and staff, the award recognizes a University faculty or staff member who represents a steadfast dedication to the Lasallian mission of education and pastoral care, inside and outside the classroom.

Mudrick, who retired in August, received the award Aug. 18 at the University’s annual Opening Meeting, which marked the beginning of the 2020-21 academic year.

“Susan is respected and loved by colleagues across campus, as well as in the business school,” said Br. Ernest J. Miller, FSC, D.Min., M.A. ’95, vice president of mission, diversity and inclusion, in his introduction of Mudrick. “She had a positive and lasting impact on generations of undergraduate business students and we will miss her tremendously.”

Mudrick, who holds a master’s degree in psychology, had worked eight years as an individual and group therapist when she arrived at La Salle. A friend encouraged Mudrick to consider pursuing her MBA. Her plan, at the time, was to combine her business and psychology backgrounds toward a career in human resource management.

“While working toward my degree, a full-time administrative position opened in the business school,” she recalled. “I was fortunate to get the position and, after that, I fell in love with La Salle; it’s a special place and I just never wanted to leave.”

After receiving her MBA two years later, the School of Business promoted Mudrick to assistant dean. The position, initially, focused her work in academic advising, ensuring students stayed on pace to graduate. It expanded over time to include oversight of the advising system in the school and providing training to faculty on curriculum.

The evolution of her role thrust Mudrick into program development and administrative capacities, too. Notably, she was part of the team that led the School of Business’ process of earning accreditation from AACSB International—a benchmark of excellence in business education and a distinction held by fewer than 5 percent of the world’s business schools. Mudrick’s work included committee oversight of business school faculty to develop the school’s first travel study course, the successful Business Scholars Co-op Program, and Business Freshmen Year Odysseys (FYOs). She also taught organizational behavior courses for many years along the way.

Receiving the Distinguished Lasallian Educator Award gave Mudrick “an opportunity to say, ‘Thank you,’ to dear colleagues and friends who made this a great place to work.”