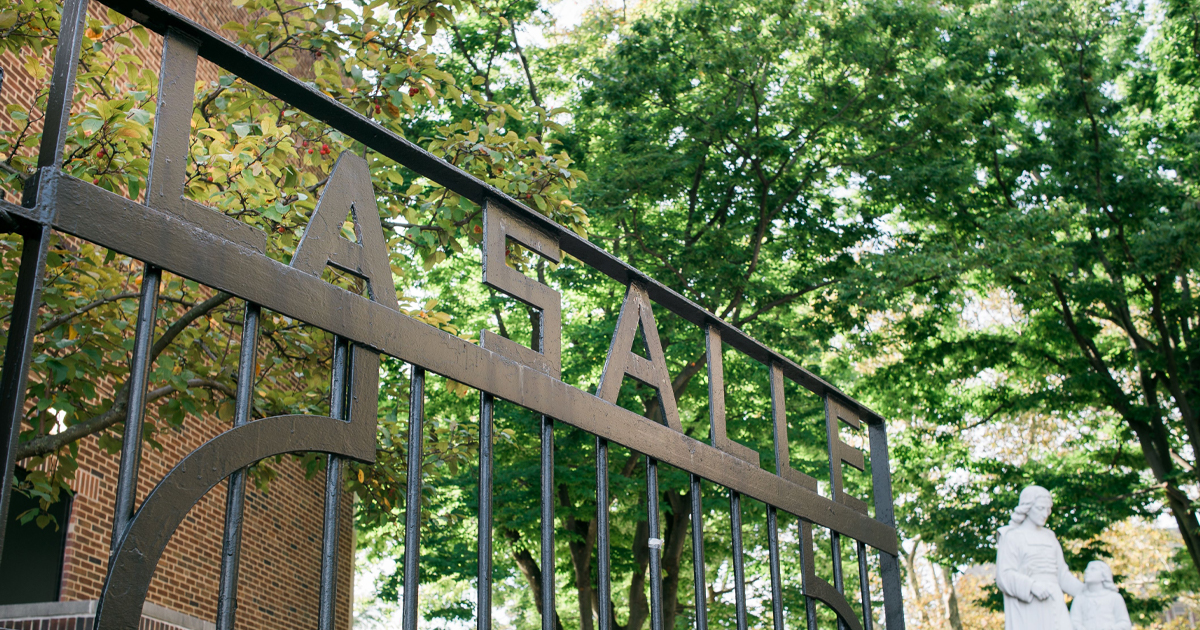 For high school student Melvin Fernandez, an opportunity to earn credits at La Salle University initially appealed to him for reasons other than academic growth.

“When I was a sophomore, I had eight periods each school day,” said Melvin, who is now a junior at Saints Neumann Goretti High School in South Philadelphia. “My brother was in the Transformation Scholars program at La Salle, so he only had five periods a day. Honestly, that really appealed to me at the time.”

Quickly, Melvin came to realize the Transformation Scholars program could offer him more than a truncated school day.

Watching his brother, Jan Hernandez, gain a head start on his higher education journey by earning college credits at La Salle at no cost and having real college experiences prompted Melvin to follow in his older brother’s footsteps. And Melvin is enjoying the path he finds himself on with La Salle’s Transformation Scholars.

“It’s like I’m getting a little sneak peek into my future,” said Melvin, 17, who completed an Education in an Urban Context course during the fall semester and is currently enrolled in a Computer Applications for Business course this semester. “I’m seeing a bigger picture and I’m getting college credits.”

Transformation Scholars is La Salle’s flagship dual-credit program. Since being introduced in 2019, it has enabled high-performing Philadelphia-area high school students to earn free college credits over their junior and senior years. Neumann Goretti is one of more than a dozen local high schools participating in La Salle’s program, which admits cohorts of 15 rising junior students per year, all of whom would qualify as either Pell-eligible or first-generation college students. Students are required to take one La Salle course in each of the fall and spring semesters of both their junior and senior years of high school.

Jan, who graduates from Neumann Goretti this June, plans to major in one of the STEM disciplines in college, in preparation for a career in computer science. Transformation Scholars is putting him in a position to hit the ground running after high school. He took Introduction to Computer Science during his junior year and is currently taking Computer Applications for Business, alongside his younger brother.

While Jan’s classes at La Salle have been delivered remotely since last spring, he said the experience of being on campus during his first semester in the program allowed him to experience what college has to offer beyond the classroom.

“I was able to broaden my horizons,” said Jan, 18. “I met a lot of people who had different experiences than mine and came from different cultures. That made me really excited to be there. I felt connected to the other students and integrated into the college experience.”

Neumann Goretti principal Hugh Quigley pointed to the increased responsibilities Jan and Melvin have taken on since enrolling in Transformation Scholars, and how they have grown from it.

“I’ve really noticed them taking ownership in a couple of different ways,” said Quigley. “They’ve taken increased ownership in their academic work, and in the time management that you need in college versus high school. They’re becoming very self-sufficient.”

Liz Langemak, Ph.D., an associate professor of English, oversees the Transformation Scholars program as director of La Salle’s Higher Education Initiative. She noted how the partnership between Philadelphia-area high schools, like Neumann Goretti, and La Salle University, creates opportunities for potential first-generation students like the Hernandez brothers to position themselves for college success.

“I was able to broaden my horizons. I met a lot of people who had different experiences than mine and came from different cultures,” Jan Hernandez

“The research shows that students who enroll in dual-credit courses through programs like Transformation Scholars tend to graduate from high school, go to college, and persist in college at higher rates than their peers,” said Langemak. “The skills these students learn as they navigate college courses and processes stick with them, setting them up for success in college and beyond.”

The brothers each said they would recommend that other hopeful first-generation college students enroll in Transformation Scholars.

“You’re preparing yourself for the future,” said Melvin. “You’ll get college credit, and it could lead to scholarship money.”

“It’s definitely an experience people should take on,” added Jan. “Just to experience the college life and take college-level courses, it will definitely help them prepare for one day actually getting into college.”