Breaking through, professionally and personally 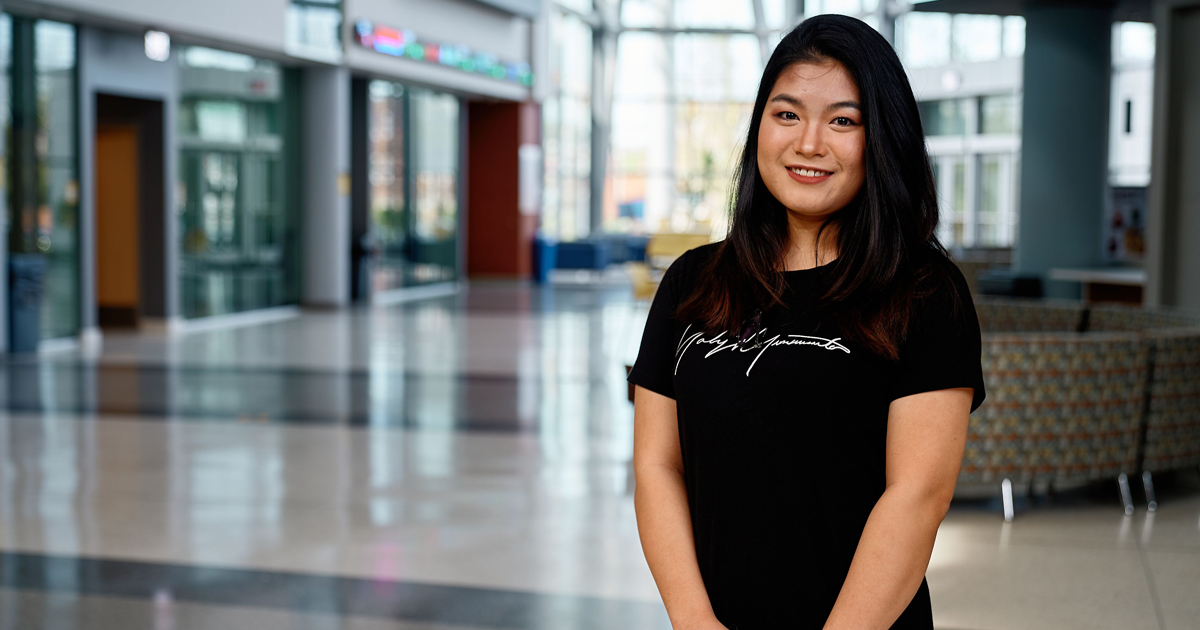 Lam Doan gained confidence as a teacher—and met her husband —while attending La Salle as an international student.

Lam Doan, ’21, is graduating from La Salle University as a double major in mathematics and secondary education, just as she had planned. However, she departs La Salle with something that wasn’t part of her plan when she arrived in Philadelphia from Vietnam in 2017.

Doan met her husband, Conrad Jones, after joining the La Salle Karate Club. Karate is one of Doan’s many extracurricular pursuits, which include cooking, photography, painting, and traveling.

Jones, a member and instructor of Philadelphia’s Shotokan Karate-do Dojo (SKDD), didn’t exactly make a great first impression when the couple met in the spring of 2018 thanks to what Doan described as playful teasing. Eventually, a relationship began to blossom.

“The following year, his dojo and the La Salle Karate Club formed a team to compete in a tournament,” said Doan. “We sat next to each other at the tournament and talked a lot. Then we started talking every day, sometimes all night, and things just went naturally from there.”

Doan and Jones, a history major at the University of Pennsylvania, officially began dating in March 2020 and married in October of last year, with two friends acting as witnesses. They plan on holding a larger wedding ceremony in the future, after they each graduate and find jobs. The couple also would like to take a honeymoon eventually. Travel is a passion of Doan’s. She traveled extensively throughout North America prior to the pandemic. Among her excursions was an art history travel study to Mexico led by La Salle’s Mey-Yen Moriuchi, Ph.D., an associate professor of art history. It’s a trip Doan categorized as the best experience she’s had at La Salle.

“I really solidified great friendships on that trip,” she said. “We traveled together for eight days. We stayed together. We learned so much together.”

It took some time for Doan to form tight bonds at La Salle, as she struggled with learning English and enduring the culture shock of relocating to the U.S. She said the guidance and encouragement she received from the staff in the Multicultural and International Center helped her emerge from her shell.

“Initially at La Salle, I wasn’t really interacting with the students much,” said Doan, who this spring has been leading math classes virtually as a student teacher at Philadelphia’s Central High School. “I just sat in the back watching my mentor teacher and watching the students. I was not really interacting with people. As time went on, I forced myself to step out. I started with a small group of students at first, and it grew from there. It really forced me out of my bubble.”

Doan also credited her time in La Salle’s Neighborhood Tutoring Program, along with tutoring work at the Center for Academic Achievement, with helping her to gain the confidence to put her English into practice in a classroom setting.

“I registered for the Neighborhood Tutoring Program so I could start practicing teaching math in English one on one with the students after school,” said Doan. “I kept going with it and now I’m so confident in front of a classroom. I teach high school full-time with a full class and I feel so good with that.”

Doan this fall will begin working toward obtaining her Ph.D. in mathematics at Johns Hopkins University, with designs on securing a teaching position in higher education. She cited the support of her research advisor, Janet Fierson, Ph.D., as she moves forward on her academic journey.

“She has been like my mom in the U.S.,” Doan said of Fierson, an associate professor of mathematics at La Salle. “Dr. Fierson has helped me a lot with research and the grad school applications. I owe so much to her.”