This nursing student’s goal: ‘To make a difference’ 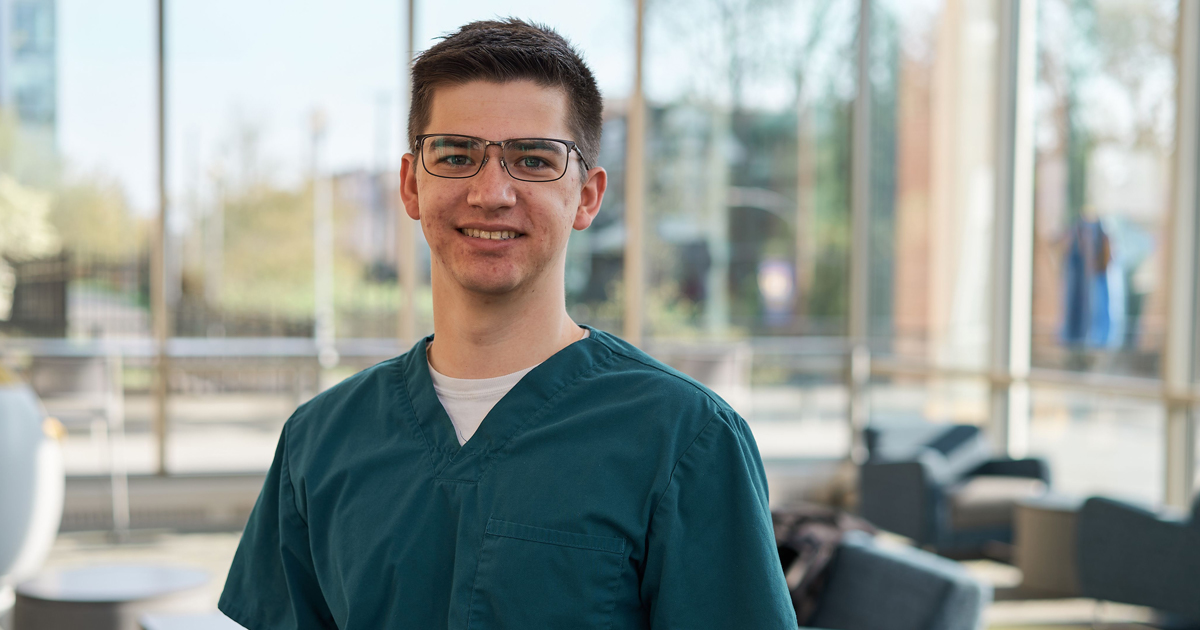 Michael Langmuir, ’21, has a calling to support families through pediatric nursing.

A moment from one of Michael Langmuir’s first clinical rotations sticks with him to this day.

He had just overheard physicians explaining to a patient what few care and treatment options remained. She suffered from chronic obstructive pulmonary disease (COPD), affecting the condition of her heart, and was told she may have less than a year to live.

“The doctors walked out and I walked in,” Langmuir said.

The patient, while shedding tears, opened up to Langmuir. She discussed her condition, spinal stenosis, which included chronic pain and made movement extremely painful. She described it as debilitating, Langmuir recalled. He said nothing.

“I just sat there. I listened. I listened to her talk about her health, her grandchildren—everything. In that moment, it was better than talking,” he said. “I think about her often. I wonder about her. I wonder if she is OK.”

Experiences like these have driven Langmuir’s desire to enter the nursing profession. A Cherry Hill, N.J., native, Langmuir is a graduating senior from La Salle University’s undergraduate nursing program.

“Pediatric care is my passion. I want to make a difference for children and their families.” Michael Langmuir, ’21

Langmuir, who applied to several rotational residency programs in the Philadelphia region, has accepted a position at Children’s Hospital of Philadelphia (CHOP). He plans to make an immediate difference as a pediatric care nurse in CHOP’s pediatric intensive care unit. Long-term, he hopes to pursue a graduate degree in nursing.

As he prepares to begin his career, Langmuir knows the statistics and the stigma around male nurses. Men comprise roughly 10 percent of the nursing workforce, according to 2020 data from the U.S. Bureau of Labor Statistics. He’s heard countlessly that he will have no issue getting hired; Langmuir knows that’s true—but because of his success in the classroom and the quality of his patient care.

“Michael is amazing—a self-starter who’s able to provide care without an overabundance of direction and helps peers with care in the clinical area and with studying,” said Dolores Matecki, Ed.D., an assistant professor of nursing at La Salle. “He is genuinely caring about patients and if a patient needs extra, Mike will take care of it.”

Langmuir chose La Salle after attending a Blue and Gold Admitted Student Day. As he put it, “I fell in love with this place.” La Salle, for Langmuir, made sense. “There’s an overall feeling that everyone here truly cares about you,” he said, “and I found that to be true from my first anatomy class to my last nursing class. Every professor cares about my success.”

Langmuir is ready to launch his career—and change lives.

“Pediatric care is my passion,” he said. “I want to make a difference for children and their families.”