Honoring Sept. 11 and looking “to a future of hope” 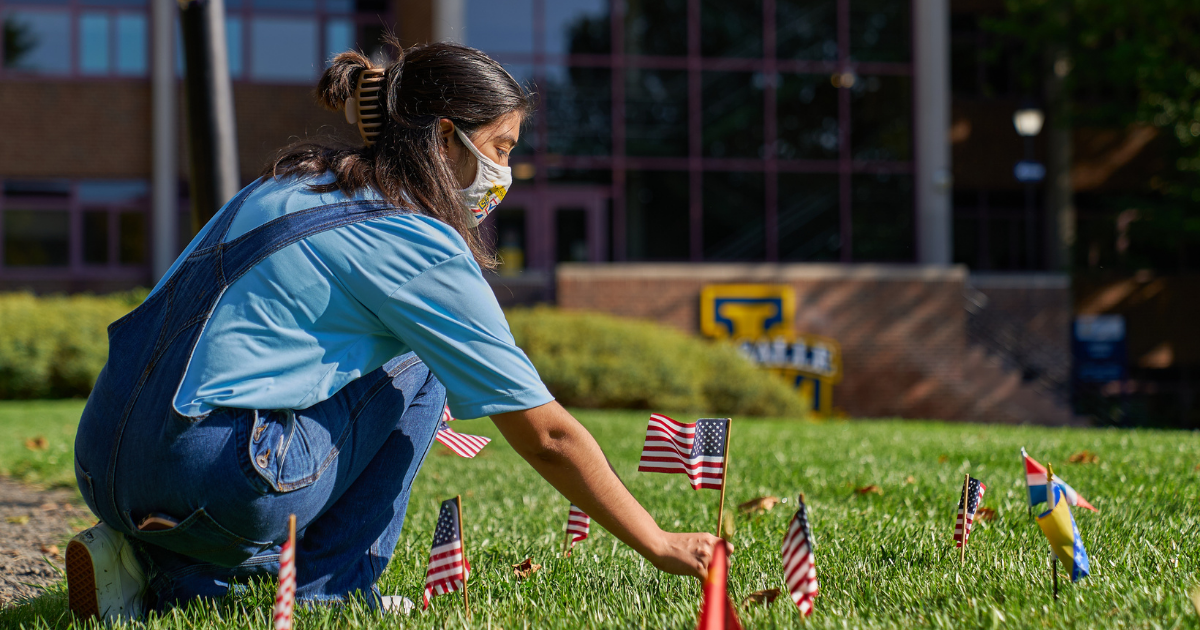 A flag ceremony organized by student government leaders recognized the 20th anniversary of the Sept. 11 attacks.

Miniature flags placed into the grass at La Salle University’s Hansen Quad tussled in a gentle breeze. The flags served as a solemn reminder of those whose lives were lost in the terrorist attacks of Sept. 11, 2001.

Alongside nearly 100 U.S. flags, Isabelle Pope, ’22, SGA leadership, and Cherylyn Rush, director of multicultural affairs, installed the flags of dozens of countries—representing nations of origin of those nearly 3,000 whose lives were lost at the World Trade Center, the Pentagon, and in Shanksville, Pa.

“In this struggle for peace and global understanding,” said Br. Ernest, “let us meditate on these principles: Where there is violence, let us work for peace. Where there is division, let us seek unity. Where there is political discord, let us seek the common good. For it is in humility that we learn, it is in seeking forgiveness that we are reconciled, and it is in dying to self that we are born to new light. Let’s hold close the longstanding Lasallian motto, Indivisa Manent—‘To remain united.’” 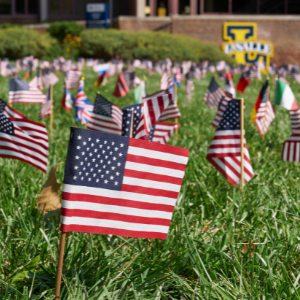 SGA has organized an annual 9/11 memorial event since 2002, with co-sponsorship support through the years from La Salle ROTC and the University’s International and Multicultural Center. This year, SGA delivered its event through digital means, “allowing greater access and opportunity for our community to come together,” said SGA vice president Emily Dorr, ’22.

“Though this generation is too young to remember the attacks on 9/11, La Salle’s Students’ Government Association recognizes the importance of continuing in the tradition of the memorial event because it reminds us of the unity that was displayed by all Americans that day,” said Dorr. “We hope that, in doing so, we can honor the lives of those that died that day and reflect on how our Lasallian community can come together to address any adversities we will continue to face.”

In the immediate aftermath of the attacks, the University community recognized the moment in history by soliciting for prayer reflections outside De La Salle Chapel and organizing memorial liturgies and academic talks that examined the state of higher education, domestic and foreign threats, and terroristic ideology.

“How we move about in daily life remains one of the most poignant themes of that day,” Br. Ernest said. “It reminds us we do not know what tomorrow will bring—an important lesson many of the survivors of that day still contemplate. … As we commemorate this day, we look to a future of hope.”

The impact of Sept. 11 is pervasive in La Salle’s classrooms, too.

Brother Edward J. Sheehy, ’68, FSC, Ph.D., associate professor of history, often discusses World War II, the Vietnam War, and 9/11 with students who—for the most part—were not born when these events unfolded. He said it’s critically important to educate students on the historical significance of Sept. 11.

“In my class just (Wednesday) morning, I talked to upper-level students about a part of history they don’t remember because they simply were not alive to see it,” he said. “If you weren’t there, history cannot even begin to explain the emotion of that day. But remembering Sept. 11 reminds us of the sacrifices that were made by countless individuals in our communities—both then and now.”