In the lab, it’s a labor of love 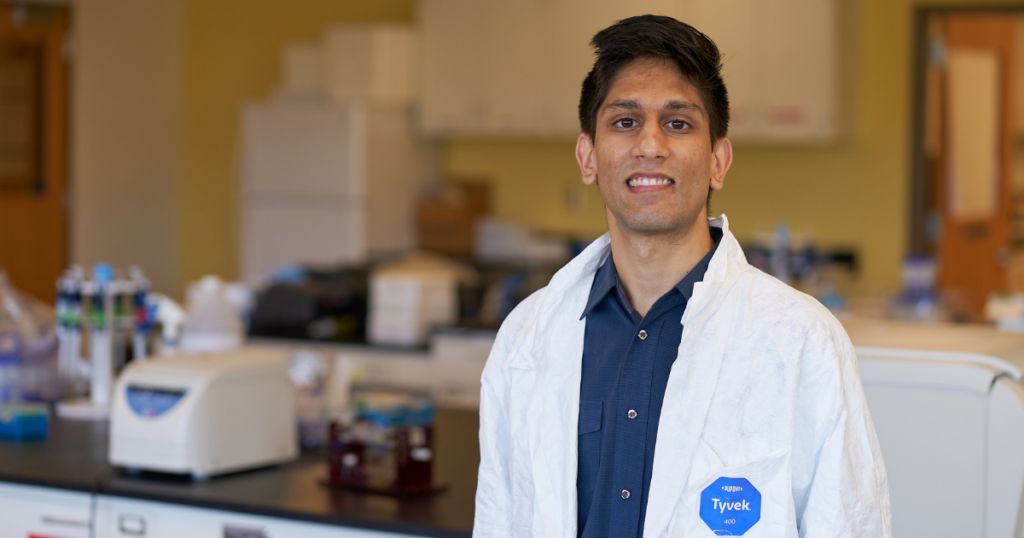 Undergraduate research opportunities are just one of the interests Anand Thakkar, ’23, has pursued at La Salle.

Formative life experiences can take place anywhere and at any time—even while finishing a crossword puzzle.

Anand Thakkar, ’23, visited the New Jersey home of a man dying of lung cancer, during the summer of 2021. The patient had entered home hospice and Thakkar, at the time a clinical volunteer, tried whatever he could to comfort the man. They talked about his life and legacy. They discussed the good he had created—in himself and in those around him.

“And we played lots of games,” said Thakkar, a third-year biology major at La Salle University. “We watched game shows on television, we played games and crossword puzzles. Being by his side, providing sympathy and empathy, was important.”

A pre-med student, Thakkar aspires for a career as a physician. He is determined to make a difference in the world. That starts, he said, with holistic care and soft skills, like those applied to his role in hospice care.

“La Salle is shaping me intellectually, personally, and holistically,” said Thakkar, a Linwood, N.J., native. “Every physician needs to develop a compassionate side—the person, the spirit, and the soul inside of you—in order to connect with and best serve a patient. That’s how I approach every day.”

Undergraduate research projects are increasingly more common at La Salle, where they span various disciplines across the University’s three schools. And they are helping Thakkar strike a balance, as a comprehensive healthcare provider-in-training.

Over the summer months in 2020, he began working with La Salle associate professor of chemistry Zeb Kramer, Ph.D., on a computational research project. They used GROMACS computer-based programming to run molecular dynamic simulations on what are called intrinsically disordered proteins, or IDPs. More specifically, they focused on amyloid beta proteins that have a potential role in causing Alzheimer’s disease. Each IDP can vary in shape, structure, and function. In reading and analyzing them, Thakkar better understands how to identify differences in IDP regions.

“For example, a protein named amyloid beta, when it aggregates, forms plaques that lead to Alzheimer’s Disease,” Thakkar said. “Working with Dr. Kramer strengthened my understanding of the scientific method involved with this analysis. This project also helped me gain experience with computer programming, which is more involved in medicine than ever.” 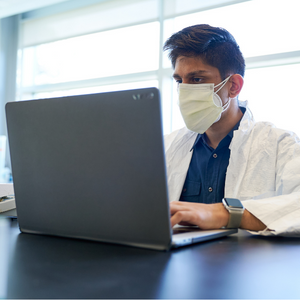 “My research is driven by simulation, mathematics, and constant literature searches,” Kramer said, adding that students who conduct research with him “have to be willing to learn new skills and push themselves to learn theory beyond what is taught in the classroom. … Anand was one of the most hard-working and motivated research students I have had.”

Thakkar’s next research project will meld his major in biology with a burgeoning interest in business and finance. He’s beginning to explore game theory and the different behaviors associated with risk, including the conditions under which decisions are made. (These include anxiety, pressure, confidence, and fear.) Thakkar will approach evolutionary game theory through the lenses of physiology and psychology to draw parallels between biology and the stock market.

“All of La Salle’s faculty have been open and kind, pushing me to pursue my interests,” he said.

Thakkar’s interests include volunteer work with Habitat for Humanity and La Salle’s Neighborhood Tutoring program. The latter pairs La Salle students with kindergarten through eighth-grade students from the neighboring Northwest Philadelphia community to offer academic support. The program has been in existence since 1994.

Before choosing La Salle, Thakkar and his family had toured a number of universities. He was sold on La Salle after meeting with Br. Michael J. McGinnis, FSC, Ph.D., the director of La Salle Honors. “Br. Mike was the only faculty member I observed at any university who spoke with each individual student, asking about their major, hobbies, and interests,” Thakkar said. “When he spoke with me, I knew La Salle and the Honors Program were right for me.”

Thakkar’s father, Priyesh, ’93, a first-generation American, is a nephrologist who graduated from La Salle. “He definitely nudged me toward La Salle, too,” Thakkar said with a smile. Thakkar noted the strong outcomes that came from his father’s journey through La Salle.

“He found his calling. He found faculty here who helped him achieve his dream and embody the idea of the American dream,” Thakkar said. “I wanted to do the same. I got the feeling that, when I came to La Salle, I’d find a second family here, and I have. Now, I’m putting in the hard work to achieve something special. I’m on my way.”