The student behind the mask: Meet the 2022-23 Explorer 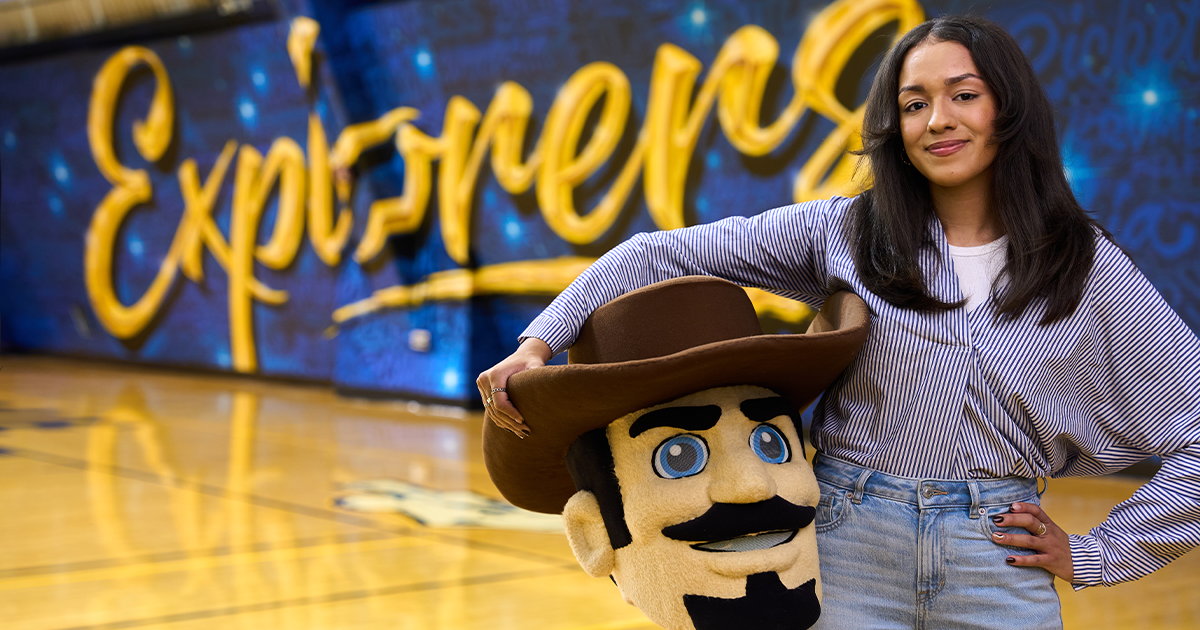 Marketing and finance double-major Alexis Sanchez, ’25, is the first woman to play the part in at least the last seven seasons.

Alexis Sanchez, ’25, attended a La Salle men’s basketball game a year ago, but the details around it are somewhat fuzzy.

That’s because Sanchez had her eyes trained away from the court.

Instead, she focused her attention on The Explorer, La Salle’s mascot. A marketing and finance major, Sanchez eagle-eyed The Explorer—every time he walked the baseline, interacted with fans, or gestured toward the crowd.

“I remember saying, ‘If I was the mascot, I would bust some moves and break out some cartwheels,” she said. “Instead of saying ‘if,’ I knew I should reach out to someone.”

A tryout followed and, nearly a year later, Sanchez is poised to take the floor in Tom Gola Arena at TruMark Financial Center as The Explorer. She’s the first woman to play the part in at least the last seven seasons, according to La Salle Athletics—a detail that is not lost on Sanchez. “I want to be a role model for others looking to try new things and break the mold,” she said.

Sanchez arrived at La Salle last fall from Philadelphia’s Tioga section. The first in her family to pursue a college degree, she enrolled through La Salle’s Academic Discovery Program, which provides first-generation students like her with mission-focused support to help students establish study habits and career goals, and promote high academic achievement. After graduation, Sanchez aims to work professionally in residential real estate.

Until then, she’s centered on expanding her education and getting more involved on campus. The latter got her thinking back to that basketball game she had attended. It conjured up memories of that one time in high school, at Philadelphia’s Kensington Health Sciences Academy, when she put on the school’s mascot outfit. A two-sport athlete back then, Sanchez knew she had the athleticism to play the part. “But it was smelly,” she said, when asked what she recalled. Aside from that? “It’s hot. It’s stuffy. But surprisingly, it’s not stiff. I remember being able to move pretty freely and pull of some of the viral dance moves at the time.”

Sanchez contacted the marketing and promotions team at La Salle Athletics toward the end of the 2021-22 academic year. She scheduled a block of time, during the cheerleading team’s tryouts, to rehearse as The Explorer. Her first time climbing into suit felt right, even if it didn’t fit perfectly. She did well enough to score the job for the 2022-23 season—though, Sanchez said, she needs to practice her footwork.

“The hardest part, you’d be surprised, is walking,” Sanchez said, laughing. “Those first steps in the suit, I couldn’t walk without looking at my feet. I know I’ll get the hang of it.”

“The Explorer is an important figure at La Salle and an integral component of our in-game experience,” said the Department of Athletics’ Dan Lobacz, who serves as Associate Athletic Director of External Relations. “We are so excited to have Alexis take on the role this year and carry on this proud tradition.”

The role of The Explorer, Sanchez said, boils down simply to four main tenets: “You have to be fun. You have to be outgoing. You have to dance and get others to do the same. And you have to love the team you’re rooting for.”