The day President Colleen M. Hanycz, Ph.D., settled into her office in the Peale House this July, a new chapter began in La Salle University’s storied 152-year history. And it’s already proving to be a page-turner.

On Oct. 9, La Salle held its first Presidential Inauguration in the 21st century, officially installing Hanycz as the 29th President, the first laywoman to lead the institution since its founding by the Brothers of the Christian Schools in 1863.

While the face of the University has changed, its story still champions the same core tenets. And Hanycz provides a new voice to tell that story—with a contagious energy that has reinvigorated the University’s dedication to faith, service, and community.

“Each day that I spend on campus only reaffirms how proud I am to call myself a Lasallian,” Hanycz said.

Her Inauguration theme illustrates that pride and the continuation of that legacy beautifully: Inspired by Faith. Dedicated to Service. United in Community. These principles are the glue that binds La Salle’s rich history with Hanycz’s bright vision for its future. 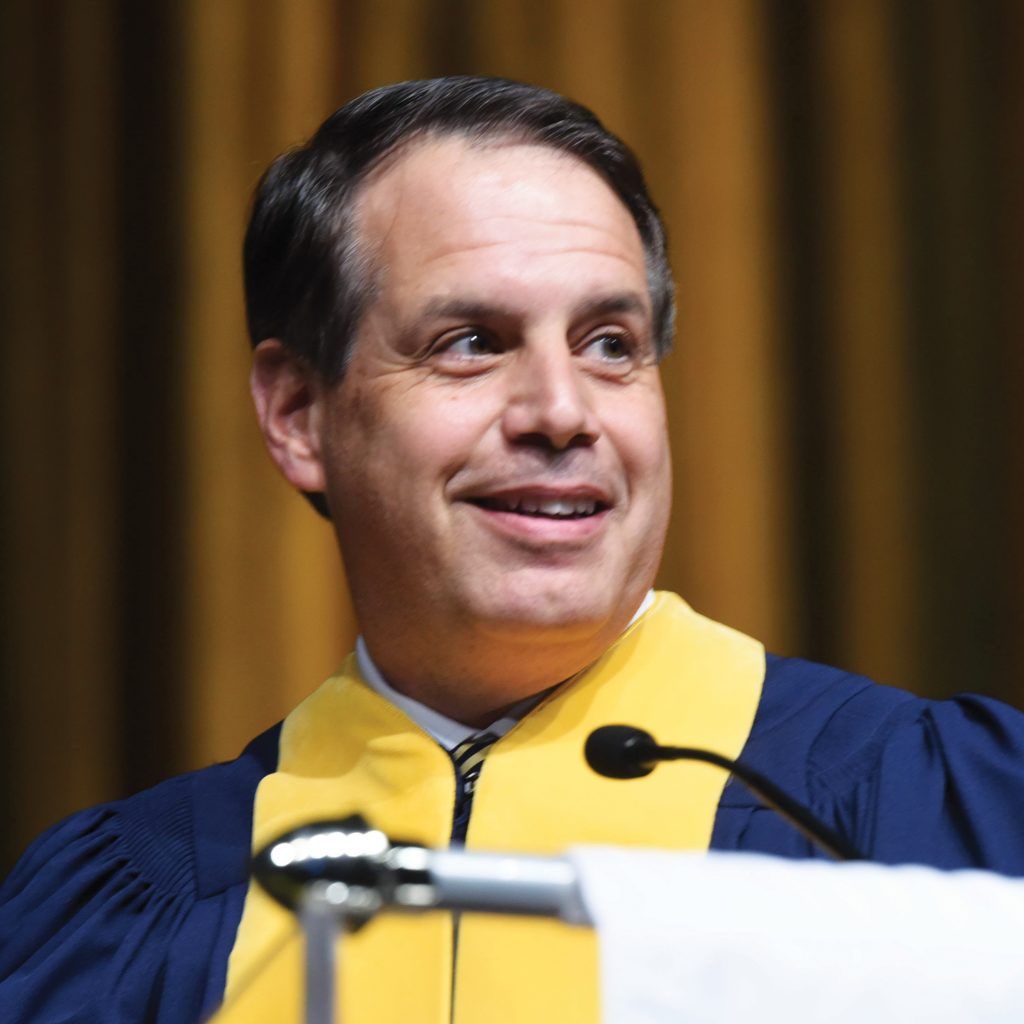 “(President Hanycz) is exactly the leader our University needs to guide La Salle,” said Steve Zarrilli, ’83, Chair of La Salle University’s Board of Trustees. “She is dedicated to our Catholic and Lasallian mission and continues to approach her service to our University in a Lasallian way, with a focus on uplifting the community—both on campus and beyond.”

In the weeks surrounding her Inauguration, Hanycz did just that. And the La Salle community took her call to action to heart. Whether they were participating in groundbreaking events that made history or carrying on long-held traditions that built upon it, Explorers exemplified the values of faith, service, and community in action.

The world’s eyes watched Philadelphia this September as the City of Brotherly Love welcomed hundreds of thousands of guests for the world’s largest gathering of Catholic families, and La Salle rose to the occasion. With co-sponsor PwC, the University hosted the first-ever Mayors Forum for the World Meeting of Families (WMOF) on Sept. 23.

Mayors from across the country came together in Tom Gola Arena to discuss ways in which local governments can help strengthen and sustain families through public policy and advocacy. During his opening address Archbishop Vincenzo Paglia, President of the Holy See’s Pontifical Council for the Family, emphasized the strong link between the family and the city. “The future of families and the future of cities is only one future,” he said. 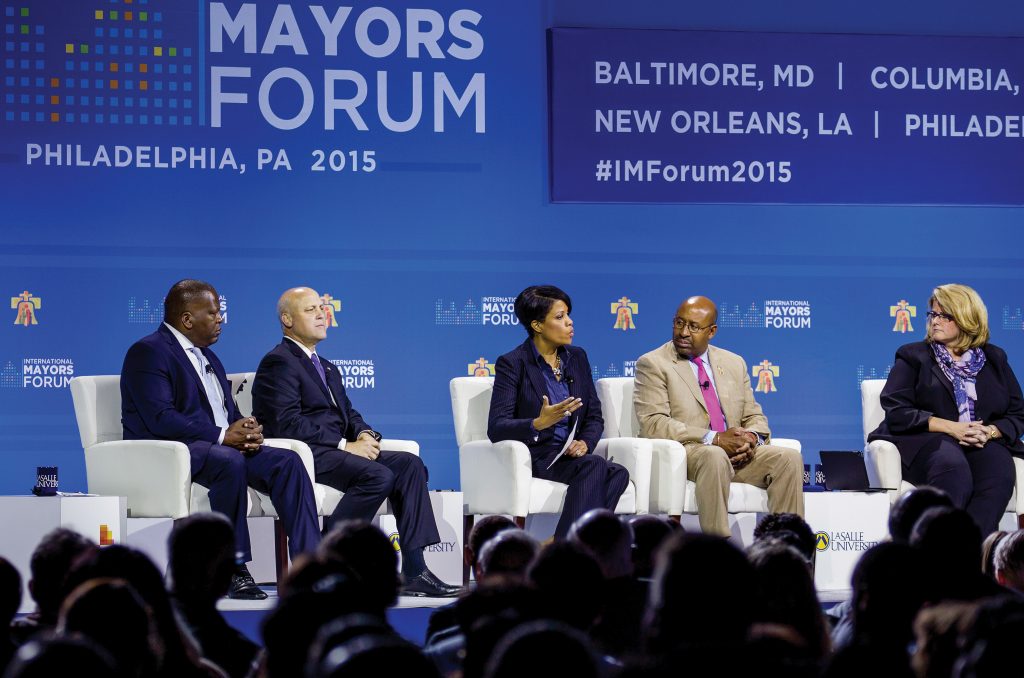 “La Salle (was) delighted to host the Mayors Forum, which aims to cultivate conversation around important topics such as this, and we (were) proud to welcome these leaders to our campus at 20th Street and Olney Avenue,” she said.

The La Salle community was also proud to welcome the world to our city, but it was no small feat. Churches, businesses, and organizations throughout the city coordinated for a year or longer, and many Explorers played key roles through all of it.

Pope Francis announced his visit in November 2014, but the Archdiocese of Philadelphia was gearing up for the WMOF long before that.

“We were probably preparing for a good two years in my office, between media interviews, getting credentials for staff around the world, and logistics here and there,” said Stephanie (Salvatore) Brophy, ’06, Associate Director of Communications for the Archdiocese.

Franz Fruehwald, ’80, MBA ’94, the Archdiocese’s Chief Information Officer and his team helped build the technical infrastructure the World Meeting of Families would need throughout the week of Sept. 22. 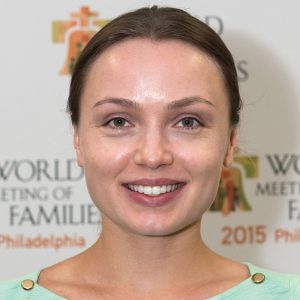 Marianna Greendlinger, MBA ’15, (right) helped to organize seating and tickets for the entire event. “People from all over the world wrote us emails and hand-written letters, and it was part of my job to make sure they all got documented and presented to the leadership cabinet for review,” said Greendlinger, who joined the WMOF as a contractor in June.

On the other end of the city at the Independence Visitor Center, Digital Communications Manager Nicole Woods, ’06, was busy with projects and promotions for Pope Francis’s visit. “Although we weren’t producing or profiting from the event, its historical nature warranted every department’s full attention—and I was thrilled to be part of it,” she said.

“Catholic higher education today finds itself at a moment of significant change,” President Hanycz said. “To forge La Salle’s path into the future, we must first return to our roots and ensure that we never lose sight of our historic identity and place in the broader landscape, an identity that is intricately woven into the fabric of Catholicism in the City of Philadelphia.” 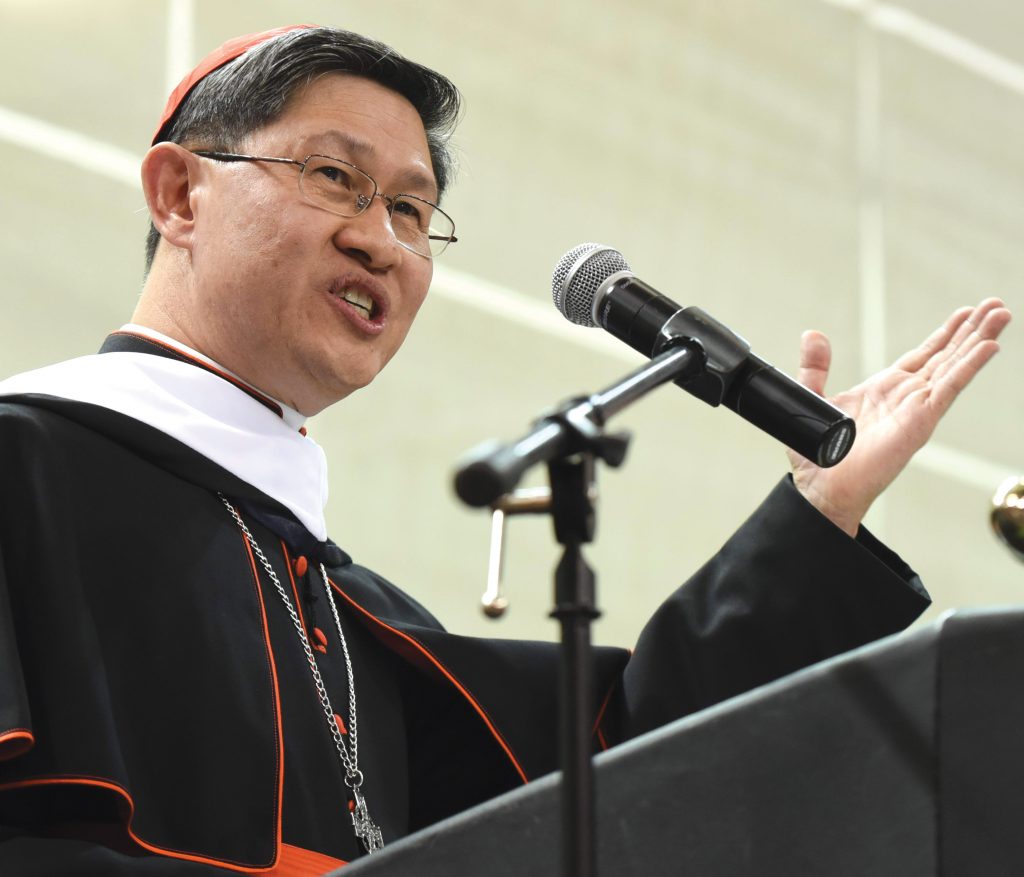 Days before delivering his keynote speech at the WMOF, Cardinal Luis Antonio Gokim Tagle, D.D., S.T.D., addressed students and families at the Honors Convocation after receiving an honorary doctorate from the University.

President Hanycz noted that it’s fitting for someone who has traveled the globe to share a message of peace and hope to officially be called an Explorer. Pope Francis recently appointed the Archbishop of Manila in the Philippines a member of the Pontifical Cor Unum, which manages the Church’s charitable and humanitarian activities around the globe.

“(He) is a man of great faith, who has put that faith into action to be an ambassador for peace, justice, and hope around the world,” said La Salle Trustee Brother Dennis Malloy, F.S.C., ’74, M.A. ’83, who sponsored the honorary degree and is Provincial/Visitor for the District of Eastern North America of the Brothers of the Christian Schools.

“Pope Francis may not have visited La Salle’s campus, but La Salle was there,” said NBC10 news reporter Matt DeLucia, ’07, who covered Pope Francis’s events both here in Philadelphia and in Washington, D.C.

“You’ve got this huge global event and every time you turn a corner, whether it’s on the news side or the public relations side, it’s, ‘Yeah, I went to La Salle, too!’,” said Ken Gavin, ’01, Director of Communication for the Archdiocese of Philadelphia. Gavin worked with Meg Kane, ’03, Senior Vice President of Brian Communications, to receive the press corps and manage public relations for the entire WMOF Congress and Papal visit. 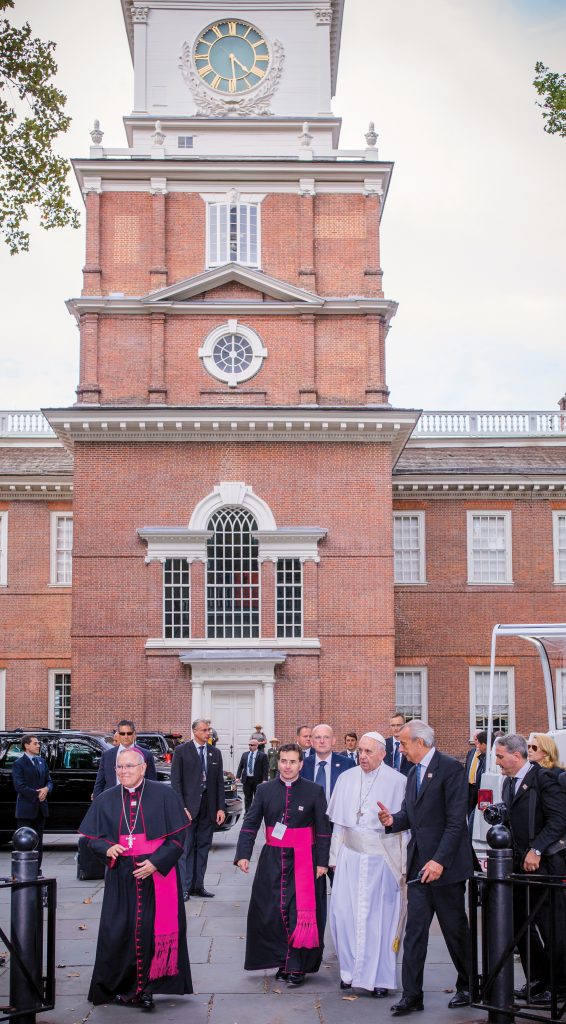 “There are 550 million people in North America, and there are only a handful who get to do what we were permitted to do, so it was really a privilege to be at the center of all that,” Gavin said.

That Sunday, Vice President for Mission Br. Ernest Miller, F.S.C., D.Min., M.A. ’95, brought La Salle to the world stage as a commentator for 6ABC’s coverage of Pope Francis’s address at St. Charles Borromeo Seminary and visit to Curran-Fromhold Correctional Facility. “It was a privilege to be able to offer commentary on the social justice and pastoral themes the Pope is emphasizing in his papacy,” Br. Ernest said.

FOX29 News Operations Manager Erik Smith, ’96, coordinated the national and international coverage of Pope Francis’s departure from Philadelphia International Airport. “I’ve never experienced such a powerful feeling of communal togetherness between people of all races, ethnicities, nationalities, and religions,” he said. “It truly was overwhelming to be a part of it and to get to be at several of the events that the Holy Father attended.”

Support from Behind the Scenes

Hosting the world in your city requires many hands to feed people, inform people, transport people, assist the impaired, and prepare for emergencies.

SEPTA had the amazing responsibility of helping more than 400,000 people travel in and out of Philadelphia during that weekend. Heather Redfern, ’97, helped monitor SEPTA’s command center to make sure no complications came up for riders. She’s also SEPTA’s Public Information Manager and began working in June to make sure visitors and residents had all the information they needed to travel during the weekend.

“It was basically all hands on deck for SEPTA,” she said. “We had operators, engineers, and conductors, support staff and operation staff; we had ambassadors at all of the stations directing people, and we were watching in our command center to make sure everything was running smoothly.”

Jennifer (Sears) Gutowski, MPH, ’15, spent the weekend on call at the Philadelphia Department of Public Health to monitor and respond to any diseases or foodborne outbreaks.

La Salle English Professor Stephen Smith, Ph.D., and Nicole Sardella, ’15, read audio descriptions for the blind during the Festival of Families and the Papal Mass.

Lynn Buono, ’75, also had a big supporting role to play: feeding Pope Francis and Vice President Joe Biden, along with 500 guests and more than 150 support staff as the Pope prepared to leave Philadelphia that Sunday. She’s the owner and Chief Commercial Officer of Feast Your Eyes Catering, who also catered a dinner for the mayor of Rome and fed volunteers during Pope Francis’s other stops in Philly. “It was a job filled with exciting challenges, Secret Service sweeps, and security-approved, Pope-appropriate knives, and we couldn’t have had more fun doing it,” Buono said.

A Pilgrimage to the Papal Mass

Along the six-mile walk, the group stopped at several “shrines” that raised awareness of North Philadelphia’s distinctive history, social justice issues, and the resilient spirit of faith. “In the Lasallian tradition, we walked through the city and attempted to understand the struggle of the surrounding community and how it relates to us,” said sophomore Jacques Linder.

Students read reflections at each stop that encompassed Pope Francis’s messages of multiculturalism, economic support, and love, and were embraced—literally and figuratively— by community members they met along the way.

“We embarked on a journey in which we were brought together as a Lasallian community that celebrates the plethora of diverse cultures and faith beliefs among us,” said senior Mohamed Abdallah, who started the event with a traditional call to prayer in Islam. “Our Lasallian mission emphasizes inclusion and diversity, and that came to light as we embarked on our Papal Pilgrimage to witness this historical Papal Mass in Philadelphia.” 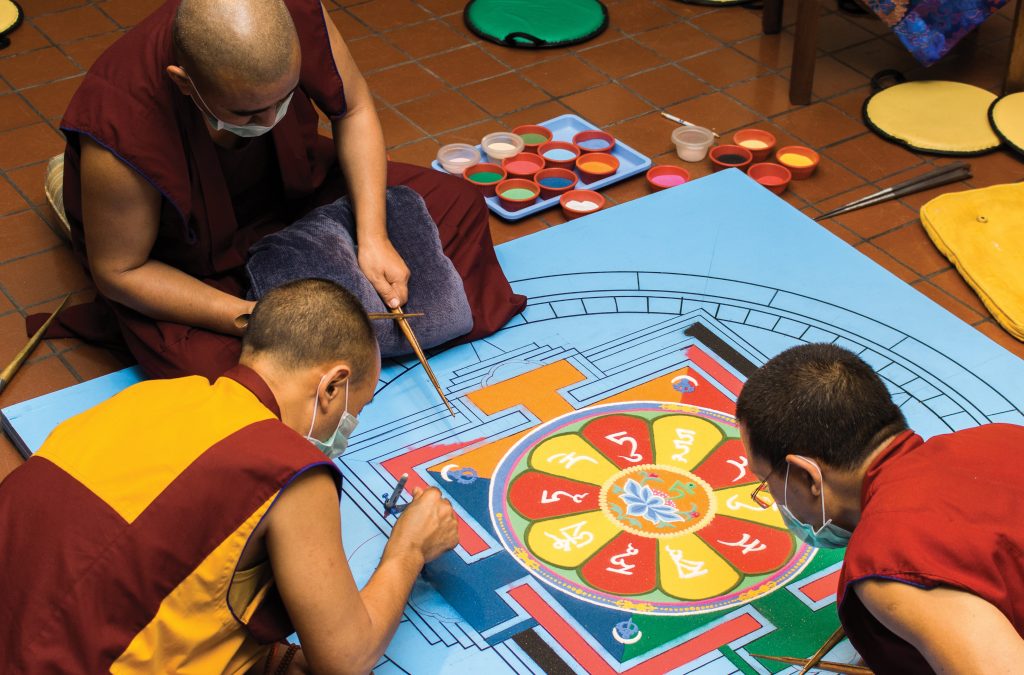 His Holiness the Dalai Lama planned to visit Philadelphia in October to receive the Liberty Medal Award and lead a teaching at La Salle’s Tom Gola Arena. However, physicians advised him to cancel his trip due to health concerns.

While the Dalai Lama unfortunately couldn’t come to campus, La Salle made sure his message did, with a series of events about his teaching. One of the highlights, Tibetan monks from the Drepung Gomang Monastery in India spent days in La Salle’s Art Museum crafting a Medicine Buddha sand mandala for the Dalai Lama’s health. During the deconstruction ceremony on Oct. 27, the monks swept the mandala back into a pile of sand and distributed some to those in attendance, before taking the rest to the Schuylkill River.

“As the monks ritually distribute the sand of the mandala to members of the community and offer the remainder in a body of water, the idea is that its blessings go, symbolically, to the four corners of the earth,” explained Julie Regan, Ph.D., assistant professor of religion.