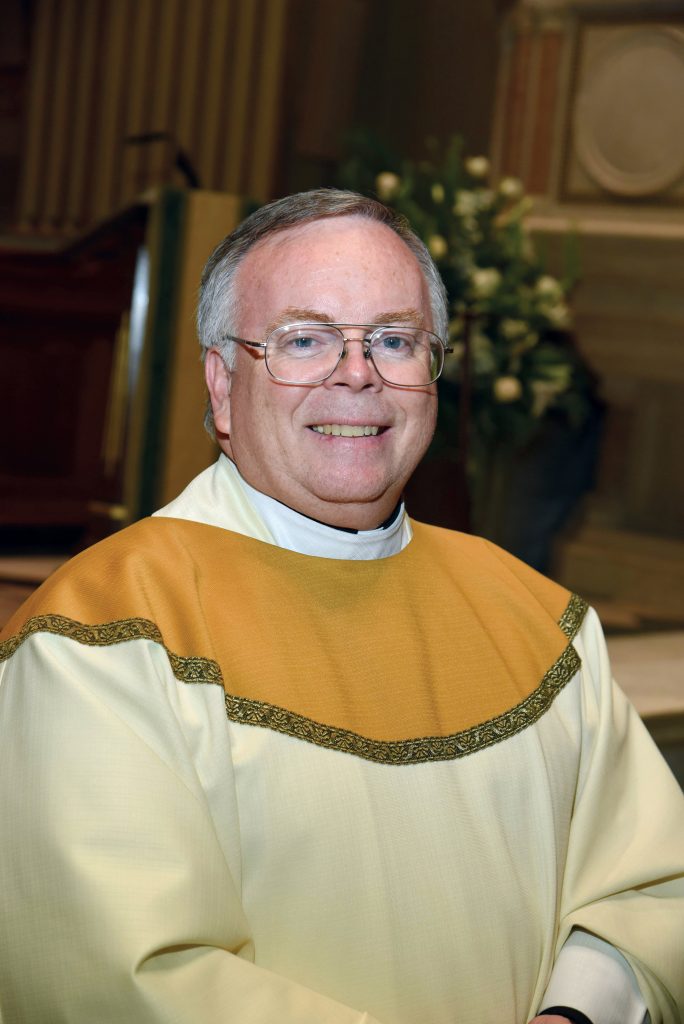 Father James J. Grogan Sr., M.A. ’12, calls his journey to ordination “a little bit unusual.” Priesthood hasn’t been his only vocation. Before becoming a priest, he was called to be a husband, a father to three sons, and a deacon at Our Lady of Good Counsel in Moorestown, N.J.

But everything changed in 2007 when Ellie, his wife of 25 years, lost her battle to ovarian cancer. Her passing left him wondering, “What’s next?” They had made retirement plans to travel and spend time at their vacation home at the Jersey shore, but none of that seemed appealing without his wife by his side.

“Having received the Sacrament of Holy Orders through the ordination to the deaconate, it was not an option to consider getting married again,” he said. His sons noticed that he seemed happiest when serving the Church. Thus began his path to the priesthood, with his pastor’s support.

While Fr. Jim’s calling was new, the idea of priesthood wasn’t—two of his uncles and his brother served as priests in the Archdiocese of Philadelphia. “I was very blessed to grow up in a family where the priesthood was not a foreign idea, it was not a different thing,” he said. “As kids growing up, we went in and out of rectories. They weren’t scary places where you needed to get paperwork—it was where your uncle lived and hung out.”

Fr. Jim calls his time at La Salle a discernment journey: “It was to see what do I need to know, what can I learn toward the idea of very simply being a parish priest?” He felt La Salle was the best fit because of the Religion Department’s concentration in Pastoral Care; he said it was the only local program that didn’t exclusively focus on the academic side of theology.

He also found a mentor in Father Francis Berna, Ph.D., Director of the Graduate Religion Program in Theology and Ministry. “Fr. Frank knew I was there to figure out whether I was being called to be a parish priest, which is a pretty unique journey,” he said. “He was able to be an adviser to me through that, and I think that became one of the key takeaways from the program, more than any course. The depth of conversation about the journey I was on, that really was part of the discernment.”

Fr. Jim was ordained on June 6, 2015 and serves as parochial vicar at Our Lady of Good Counsel—the same parish where he raised his sons for 30 years. “There’s an interesting sort of comfort level from familiarity with the people, the neighborhoods, and I’m very blessed that I am the associate here,” he said. “Working with parishioners in celebration of the sacraments, offering spiritual direction when they come in to talk about it, really is a joy.”