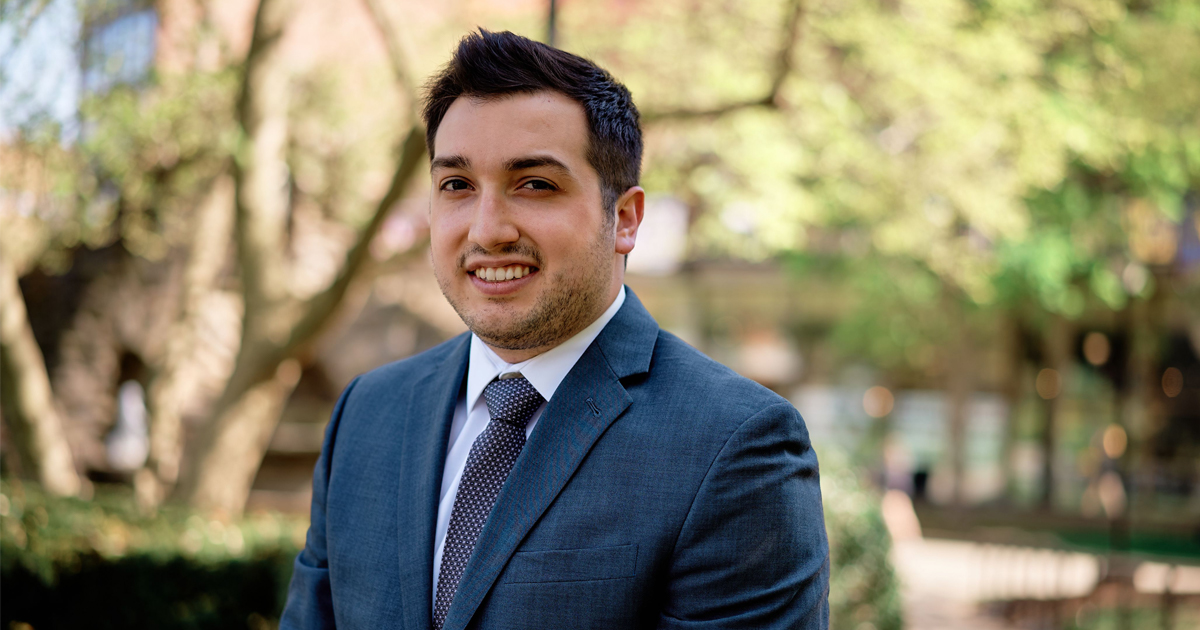 “Honestly,” he said recently, “it’s more than a home. It’s actually a family.”

La Salle is where DiGregorio completed his undergraduate education, double-majoring in chemistry and biochemistry. It’s where he considers University faculty as his professional mentors. And it’s where he returned to pursue a graduate degree in business.

That alone, for DiGregorio, would have made for a satisfactory story of personal and academic achievement. But his story does not end there. In May, he will celebrate two educational milestones: DiGregorio will earn his La Salle MBA and his doctorate in osteopathic medicine (D.O.) from the Philadelphia College of Osteopathic Medicine (PCOM).

He hopes to finalize his professional plans in the coming weeks, deciding between product and strategic development opportunities with several pharmaceutical and biotechnology companies.

Choosing the private sector, as opposed to pursuing a career in clinical care, is a decision for which DiGregorio said he “received a little pushback.” While completing his master’s and doctorate programs, he said he maintained consulting and networking opportunities with pharmaceutical companies that better informed the potential direction of his career. What did he learn? This unique path will allow him to continue to treat patients, although in a different manner, while still playing a key role in patient outcomes.

“Along the way, I also learned that the dual-degree pathway will position me to be a true subject matter expert—someone with the medical knowledge and business perspective to significantly influence an organization,” said DiGregorio, a native of Yardley, Pa. “It’s a professional path that isn’t openly discussed among medical students until they have graduated and practiced a few years. At the end of the day, I didn’t want to confine myself to one aspect.”

It was then that he contacted MarySheila McDonald, J.D., dean of La Salle’s School of Business.

“She brought me to campus and sold me on the program in 48 hours,” DiGregorio said.

DiGregorio’s ability and intellect were apparent “from the day I met Nick,” said Elizabeth Scofield, director of La Salle’s MBA program. “We have had many talks during his tenure here and he has very high goals for himself professionally,” she added. “In addition to all of this, he is a kind and thoughtful young man who reaches out to help other students.”

DiGregorio’s career will take him into oncological work, specifically with biomarkers—the parts of the body that, upon examination, can reveal a person’s response to pharmaceuticals, among other things. He hopes to identify projects that offer “a true benefit to patients.”

“In oncology, time is not on the patient’s side,” DiGregorio said. “I want to find ways to support patients with useful advancements.”

He’s confident his MBA from La Salle will guide him on this path.

“I developed fine-tuned skills and had the opportunity to engage with faculty on a one-to-one basis with personalized learning opportunities and research intentions,” he said. “I’m someone who is inclined to thrive in that setting, and that’s why I am thankful to La Salle.”