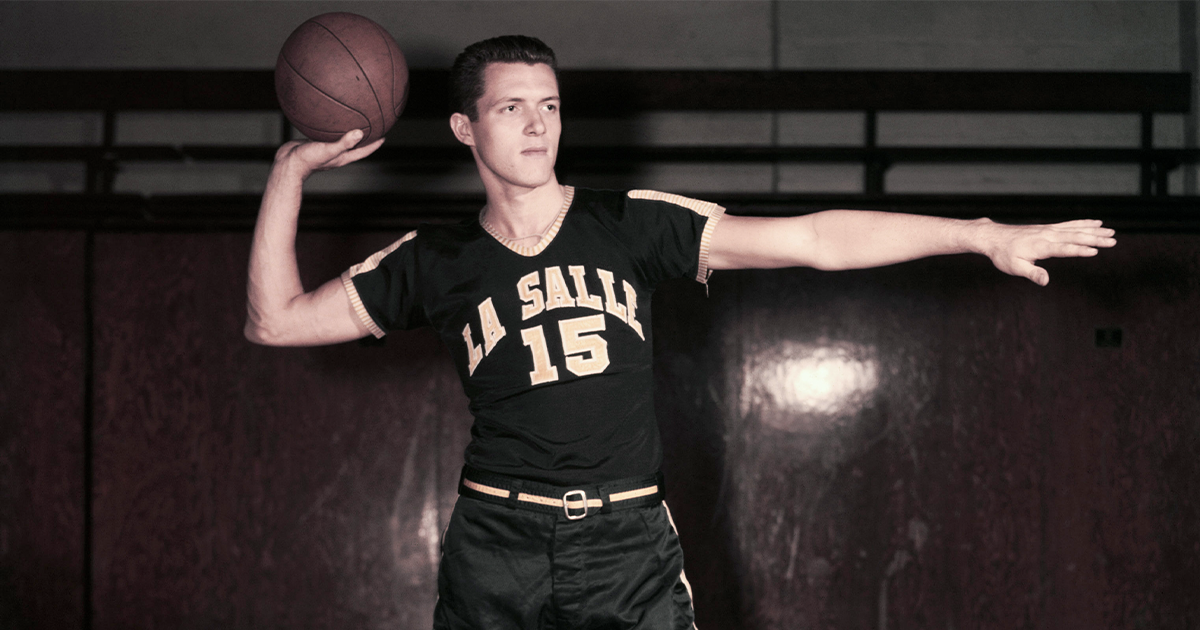 Each January, Explorers everywhere recognize the birthday of a La Salle legend—Tom Gola, ’55, whose jersey number hangs within an arena named in his honor.

The La Salle men’s basketball legend, born Jan. 13, 1933, is revered as one of the all-time greatest players in NCAA history.

Want to know more about Gola? Here are 10 fast facts about Mr. All-Around:

During his playing days, he earned the nickname “Mr. All-Around” for his excellence at both the offensive and defensive ends of the floor.

Born in Philadelphia, Gola could have gone anywhere to play collegiate basketball. He received more than 50 scholarship offers. He chose to stay home, enrolling at La Salle in the fall of 1951.

Gola was a four-time All-American at La Salle, where he averaged 20.9 points and 18.7 rebounds per game, and a five-time NBA all-star across 10 professional seasons. He retired in 1966.

He’s one of roughly four dozen or so players to win both an NCAA championship and an NBA title. (Gola won the national championship in 1954 at La Salle and a 1956 NBA crown with the Philadelphia Warriors.)

Calls to the hall

All these years later, Gola still leads all NCAA men’s basketball players with 2,201 career rebounds. In recent years, Kenneth Faried, from 2007–2011, is the closest anyone has gotten—and Faried’s career total is 528 rebounds shy of Gola’s mark.

After basketball, Gola won election in 1968 to the Pennsylvania House of Representatives—a post he left in order to campaign for (and win) the role of Philadelphia city controller just one year later. He fell short in his 1983 run for Philadelphia mayor.

As a newly elected politician, Gola held a parallel post—as coach of the Explorers men’s basketball team. He led the 1968-68 squad, with four future NBA players, to a 23-1 mark in the first of his two seasons on the bench.

Gola died in January 2014, shortly after his 81st birthday. His legacy, nationally and at La Salle, remains strong. Considered one of the greatest college basketball players of all time, he was the first to record more than 2,000 points and 2,000 rebounds. And on campus, he is the namesake of Tom Gola Arena at TruMark Financial Center, the indoor athletic arena and complex for La Salle Athletics.