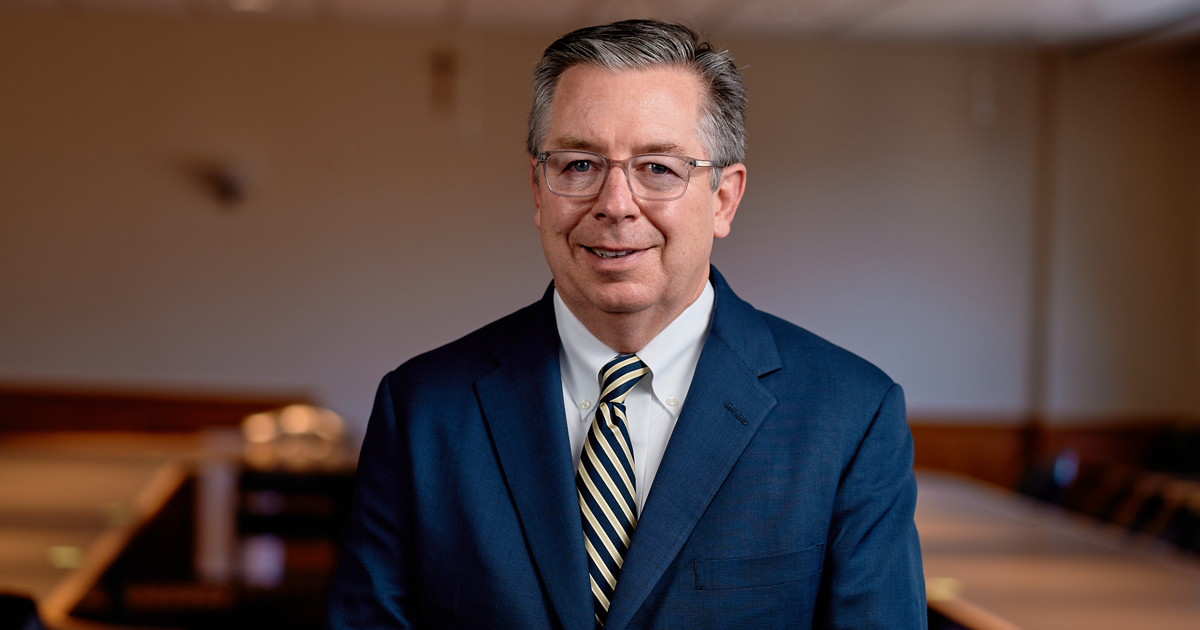 An alumnus, O’Shaughnessy will serve his interim appointment concurrent with the University’s national search for permanent presidential leadership.

Executive Vice President Tim O’Shaughnessy, ’85, has been named Interim President of La Salle University, the chair of La Salle’s Board of Trustees announced.

William W. Matthews, III, Esq., ’90, shared the announcement Monday, May 3 in a message to the La Salle community following a meeting of the Board of Trustees. Matthews also shared updates on the formation of the Presidential Search Committee and its forthcoming national search to identify the 30th president in La Salle’s 158-year history.

“A number of priorities were identified during our process of appointing an interim president,” Matthews said in a letter to the La Salle community. “We sought a candidate with senior administrative experience, a deep knowledge of Catholic education in Philadelphia, an understanding of our university, and a firm commitment to the Lasallian mission—all of which Tim brings to this role. The Board has great confidence in Tim and his focused leadership and commitment to La Salle University. He has demonstrated an abiding passion for this institution, and we are grateful to him for accepting the role of Interim President at this critical juncture in La Salle’s history.”

O’Shaughnessy has more than 30 years of executive experience across the private and non-profit sectors. As Chief Financial Officer of the Archdiocese of Philadelphia, he guided a financial turnaround of the archdiocese by eliminating a significant operating deficit and improving the balance sheet by more than a quarter billion dollars. He also played a lead role in the financial oversight and fundraising activities for the World Meeting of Families and Pope Francis’ visit to Philadelphia—both in 2015. O’Shaughnessy further brings executive experience with Aramark and St. Joseph’s Preparatory School to this role.

O’Shaughnessy received his bachelor of science in business administration from La Salle University’s School of Business in 1985. He earned an MBA from the University of Pennsylvania’s Wharton School in 1995.

“I am deeply honored to accept this interim appointment and serve as a steward for La Salle University, my alma mater, in this important transitional period,” O’Shaughnessy said. “I have had the benefit of working closely these last six months with Dr. Hanycz and her leadership team. I look forward to joining them, and our faculty and staff, in the months ahead in supporting our historic commitment to high-impact teaching and learning.”

In his campus message, Matthews pointed to O’Shaughnessy as an example of “strong, stable leadership” under whose guidance the University will “continue the forward momentum the University has achieved” under Colleen M. Hanycz, Ph.D., who has served as La Salle’s President since July 2015.

The announcement of O’Shaughnessy as Interim President and the formation of the Presidential Search Committee are in preparation for a transfer of leadership upon the departure of Dr. Hanycz, Ph.D., who will become president of Xavier University on July 1.

O’Shaughnessy will serve as La Salle’s Interim President through the completion of the Presidential Search Committee’s work and will not be a candidate for the permanent position, Matthews said. The Presidential Search Committee will be chaired by AmyLynn Flood, ’95, Vice Chair of the Board of Trustees. Faculty Senate President Swee-Lim Chia, Ph.D., associate professor of marketing, and Board Vice-Chair, Meg Kane, ’03 will serve as the Committee’s Vice Chairs. A call for nominations to the Committee from the La Salle community is open through May 17 and the committee’s goal is to complete its work and announce a new President in early 2022.