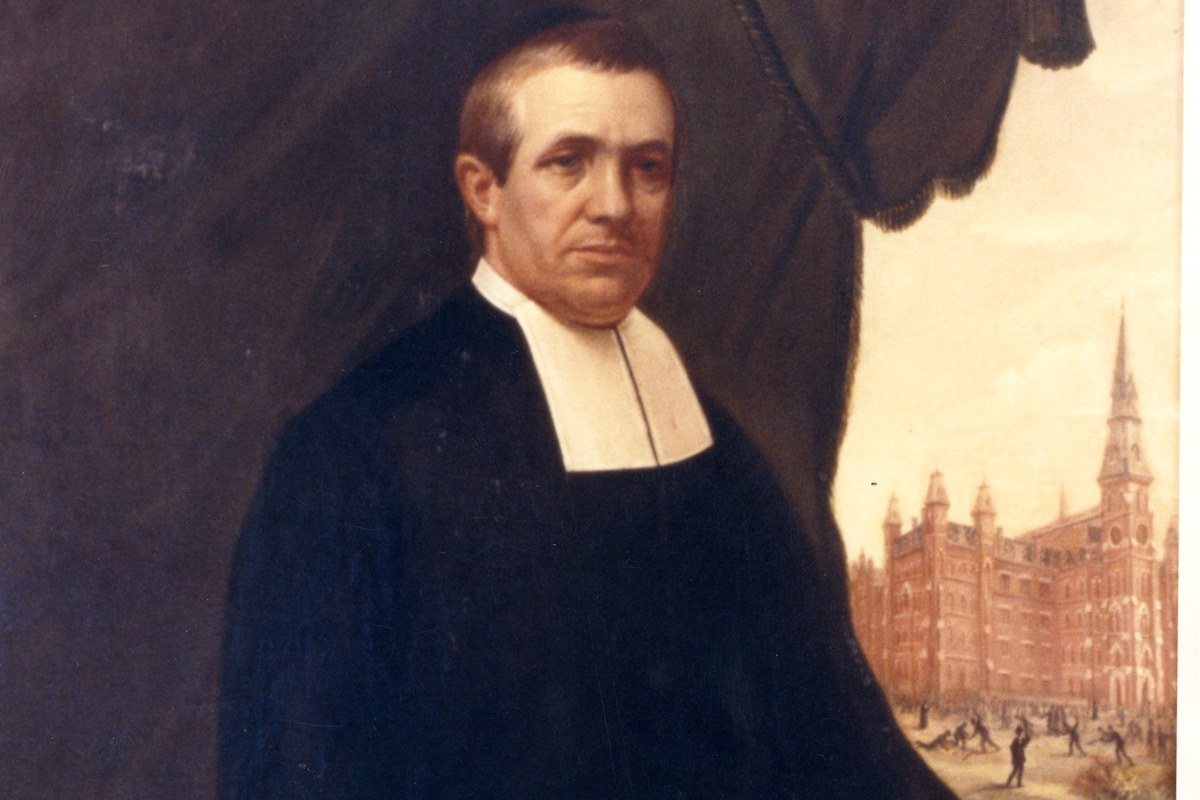 This seems like as appropriate a time as any to reflect upon La Salle’s first President—Brother Teliow Fackeldey, FSC.

Who was he? What do we know about him?

Well, the University’s presidential medal recognizing outstanding integrity, merit, and public service—considered one of La Salle’s highest honors—bears Br. Teliow’s name. So does a presidential conference room located in College Hall, where a portrait of Br. Teliow adorns a wall outside the Office of the President.

Br. Teliow maintained a critically important role in the establishment of La Salle College, which received its charter from the Commonwealth of Pennsylvania in 1863.

Born in Prussia, Br. Teliow arrived in the United States at age 21. He worked in Wisconsin and Iowa before deciding to join the Brothers of the Christian Schools. Historical accounts reflect that he showed great promise as a teacher. It did not take long before he had been tapped for academic administration duties—first leading Detroit’s St. Mary’s School in 1852 before departing in 1854 for Philadelphia, where he would guide St. Peter’s School.

Br. Teliow’s experience successfully operating Christian Brothers schools led Philadelphia Bishop James Frederick Wood to contact him regarding an existing Catholic higher education gap in Philadelphia. Two predecessors to La Salle College had ceased operations in the city due to the ongoing American Civil War. At the time of Bishop Wood’s meeting with Br. Teliow, Catholic men accounted for approximately one out of every six Philadelphia residents. The market was rife for just such an institution of higher education.

In essence, that recommendation stemming from an informal conversation gave root to La Salle University.

Following that meeting, Br. Teliow quickly went to work in carrying out Bishop Wood’s mission—the same mission upon which La Salle was founded: Develop “a college within the limits of the city of Philadelphia, in which are to be taught the elementary branches of education, together with the sciences, and modern and ancient languages.”

“A talented man, Brother Teliow’s services had been sought by the Society for the Protection of Destitute Roman Catholic Children, whose President, L. Silliman Ives, appealed directly to the Superior General of the Christian Brothers in order to have Brother Teliow assigned,” reads a passage from the 1966 book ‘Conceived in Crisis: A History of La Salle College.’ “Ives’s request was granted on December 1, 1863 and La Salle College lost a co-founder and its first president.”

Brother Oliver Daly, FSC, replaced Br. Teliow in January 1864 and, perhaps most notably, is responsible for helping to install La Salle’s first Board of Managers.

While it was common at the time for the Institute of the Brothers of the Christian Schools to issue reassignments with little advance notice, the administrative decision led to the second-shortest presidential tenure in La Salle’s history. The brevity of Br. Teliow’s presidency follows that of only Brother Dominic Luke Doyle, FSC, who assumed the office in late summer of 1945 and, before the end of the calendar year, was succeeded by La Salle’s 22nd President, Brother Gregorian Paul Sprissler, FSC.

So much has changed since La Salle first received its Pennsylvania charter. For example, La Salle twice changed campus locations before arriving in Northwest Philadelphia and calling home to its current 133-acre campus near 20th and Olney, in the historic Belfield neighborhood. And in 2015, the installation of Colleen M. Hanycz, Ph.D., as La Salle’s President marked the first woman to hold the University’s highest administrative position. Just this May, more than 3,100 students celebrated their graduation from La Salle during the University’s Commencement exercises.

None of that would have been possible without Br. Teliow.