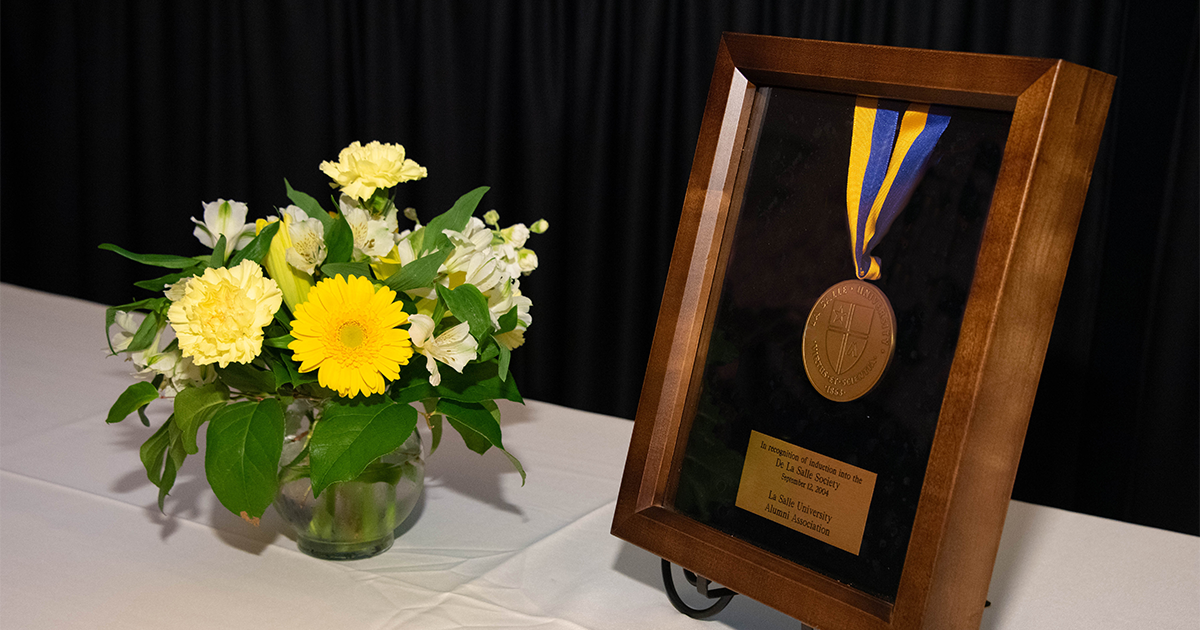 La Salle University’s Alumni Association has chosen the recipients of two marquee awards to be conferred during Homecoming and Family Weekend 2022.

The Alumni Association will present the 2022 recipients of the Signum Fidei Medal and the John J. Finley, ’24, Award during its annual awards reception—scheduled for Friday, Nov. 11, in Founders’ Hall atrium and auditorium.

Here are this year’s awardees:

The Finley Award is presented each year to a La Salle alumnus or alumna who has exhibited outstanding service to the University or the Alumni Association. Finley, from La Salle’s Class of 1924, died in 1961. He had served as Alumni Association President, Vice President, and Treasurer. To his contemporaries, he earned the nickname “Mr. La Salle” for his dedication to the University.

Br. Gerry has served as a professor of communication at La Salle, his alma mater, since 1973. He became the first chair in the Department of Communication upon its creation in 1985.

The youngest of nine children, Br. Gerry was introduced to Lasallian education in secondary school at Philadelphia’s West Catholic High School and joined the Institute of the Brothers of the Christian School after he had graduated. He later earned a master’s degree from Notre Dame and a doctorate from the University of Wisconsin, and served a professorship at Lewis University, a Lasallian university, before returning to La Salle.

Today, Br. Gerry acts as internship coordinator within the communication department and moderates the Sigma Phi Lambda fraternity. The Brother Gerard Molyneaux Scholarship and Endowed Professorship ensure that Br. Gerry’s legacy of excellent teaching, mentorship, and experiential learning lives on in perpetuity and helps support our communication students and faculty.

Liguori Academy receives the 2022 Signum Fidei Medal. Located between Philadelphia’s Port Richmond and Kensington neighborhoods, the school enrolls students across two programs: a private, four-year high school and an accelerated program for non-traditional students who are returning to school to earn their diplomas.

The highest form of recognition awarded by the La Salle Alumni Association, the Signum Fidei Medal has been given annually since 1942 and recognizes individuals or groups who have made most noteworthy contributions to the advancement of humanitarian principles in keeping with the Christian-Judeo tradition. The Medal derives its name from the motto of the Christian Brothers—“Sign of Faith.”

Founded by Michael Marrone, ’93, Liguori Academy opened its doors in 2016 with a college- and career-readiness aim and an educational mission of serving traditionally underserved students from low-income communities. Liguori graduated its first class in 2020, with an even divide among its students: half enrolling in college and half beginning their careers.